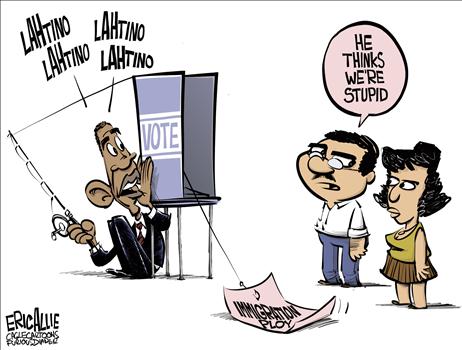 For a few years, I've been attending a monthly Thursday night Hispanic networking event.  It's fun, the food is great and it allows me to hear directly from fellow Hispanics about the state of the country.

A could of years ago, this was a predominantly Obama crowd.  I'm not talking about "the demigod status" but he was clearly loved here.  I usually found myself among the smaller crowd who had voted GOP.

I would often hear this:  "Cubanos Republicanos"!  Or, their way of saying that we Cubans vote GOP.  (That's true. Most of us do!)

What a difference a few months can make.  What I saw Thursday night is consistent with the Pew Poll that just came out this week. It reported that support for President Obama among Hispanics has dropped to 47%.

Tonight I heard a lot of disenchantment and dissatisfaction.  This is a sample of what I heard:

"Se esta ahogando" or "He is drowing".

I asked my friend:  Do you think that he is in over his head?

A lady was more profound and thoughtful.  She said that Hispanics made the mistake of falling for the guy who promised too much without considering how difficult change is.  She went to say that Hispanics fell for the cult or the problem that so many of our countries of origin have had to deal with.

A young man was angry.  He said that "Obama nos uso"  (Obama used us), or a reference to the importance of the Hispanic vote in the election and reelection.

To be sure, this was not a scientific survey nor am I moonlighting as Zogby or Gallup.  However, there is something happening and it's not good for Wendy Davis and the Democrat ticket in Texas.

The Democrats' worst fear is that Hispanics will stay home.  It looks like they will.  They are not ready to file divorce with the Democrats but we could see a state of separation coming.  And it could be a long separation, at least long enough after November 2014!