Trump vs media and other front page stories with Frank Burke

Call it the Southern Route.
Argentine police believe a Mexican drug cartel is shipping cocaine through Argentina and shipping a lot of it.
Police seized two metric tons of cocaine in the port of Bahia Blanca on June 19.
The cocaine was hidden in steel coils in an effort to deceive customs and police electronic scanners.
The big cache had a street value of at least $60 million.
In the same anti-smuggling operation, Argentine security forces seized another half-ton of cocaine in in Mendoza province, near the border with Chile.
And that indicates the new shipping route.
Police say the usual route for drug smuggling in Argentina is Bolivia or Paraguay, not Chile, but Argentina’s borders with Bolivia and Paraguay are heavily patrolled.
Since the major territorial disputes between Argentina and Chile have been resolved their mutual border is more open. The cocaine route begins in Peru.
The drugs may still transit Bolivia on the way to Chile.
From Chile smugglers enter Argentina’s Mendoza province and move the cocaine to an Argentine seaport for shipment.
Police believe cocaine from the two metric tons discovered in Bahia Blanca had two destinations: Canada and Spain.
Why do authorities suspect a Mexican cartel is involved? Police and security forces arrested 17 people in the anti-smuggling operation, and four of them were Mexican citizens from Michoacan state. Several major cartels have a significant presence in Michoacan state.

Again, no one ever said that these guys are stupid. Ruthless, yes, stupid, no way!
The article mentions Canada. I find this very interesting. I’m sure that there is a market share north of the border but there may be something else at work here. How about flooding the U.S. market from Canada? Are the cartels already calculating that President Trump will build the wall or protect the border with more vigor?
Time will tell where all of this goes. The cartels are in this to make money and they will do whatever it takes to reach their consumers. Unfortunately, too many of those consumers live in the U.S.
P.S. You can listen to my show (Canto Talk), (YouTube) and follow me on Twitter.
Tags: Cartels and new routes  To share or post to your site, click on "Post Link". Please mention / link to the My View by Silvio Canto, Jr. Thanks!
Posted by Silvio Canto, Jr. Post Link ---> 8:00 AM

A post from July 2010: We always knew that most of the media was in the tank for BO!

We've been enjoying the story (i.e. old e-mails) between media types doing their best to support candidate BO, specially after the Rev Wright videos were released in the spring of 2008!

Did anyone doubt that the media was cheering the Obama candidacy? Did some people just get it now that these e-mails were released?

Do you believe that any white candidate, Rep or Dem, could have attended a church with a racist minister banging racist sermons? or attacking Jews?

Do you believe that the media would have allowed any candidate to get away with saying that he did not hear the racist sermons?

Please don't insult our intelligence. BO wrote that he was in church every Sunday and Rev Wright was a close family friend.

The American media was very irresponsible in 2008.


"Everyone knew most of the press corps was hoping for Obama in 2008.
Newly released emails show that hundreds of them were actively working to promote him."

Let's hope that Pres BO learned a big lesson this month: Cuba won't change until the Castro brothers leave or are forced to leave.

"After Raul declared he was "willing" to discuss issues like human rights and political prisoners with Obama, Fidel responded with an essay on a state-controlled Web site that said, essentially, not so fast.
And, he predicted, Obama will wind up on the "path [to] sure failure, like all of his predecessors."
Thanks for nothing, in other words, for lifting restrictions on Cuban-Americans' ability to send their families cash.

That's more than Cuba has gotten from any US president since Dwight Eisenhower.
Which is just what Obama should have expected, after making those gestures without demanding anything of Castro.
He probably was heartened, though, by Fidel's having asked a group of bootlicking US House members what he could do to "help President Obama."

Fidel won this round.


Let's hope that Pres Obama will demand something the next time that he calls for a change in US policy.


Again, Cuba won't change until Castro brothers die or are removed by force.

Was this weird or what?

Back in 2007, the Castro dictatorship remembered a journalist, the late Herbert Matthews of The NY Times:


"Cuba unveiled a marble plaque on Saturday commemorating the interview 50 years ago by New York Times reporter Herbert Matthews that helped build the legend of Fidel Castro, the state news agency Prensa Latina reported. The plaque was placed on the spot where Matthews met with Castro at his hideout in the Sierra Maestra mountains of south eastern Cuba." (Cuba honors American who made Castro a legend)

Of course, it's nice to remember journalists. However, it's a bit strange for a country that does not tolerate free journalism to celebrate the life of a journalist.

Anyway, they call Mr. Matthews "The man who invented Fidel Castro".  He was the first international journalist to tell us about the bearded man who would become Cuba's dictator.

"Que Pasa USA" and growing up Cuban in the US

For years, "Que Pasa USA" was a hilarious comedy about growing up Cuban in the US.

We used to call it the "refugee experience" in my household. My parents always said that we were "refugees", perphaps a reference to the politics that brought us here.

Like most things Cuban, it included parents, very funny grandparents and a couple of teenagers who were in the middle of everything. It sounds like my own family growing up in the US! It will remind you of yours!


My favorite show was the one about the grandparents taking the US citizenship test or the Cuban garage sale!


Why was "Que Pasa USA" so good? Because it was true. It was easy to see your mom and dad on that show.   Also, who can ever forget having a Cuban sister?

Pedro Pan: A wonderful chapter of the Cuban experience in the US

In the early 1960's, many Cuban children were sent to the US and raised by Pedro Pan:


"From December 1960 to October 1962, more than fourteen thousand Cuban youths arrived alone in the United States. What is now known as Operation Pedro Pan was the largest recorded exodus of Unaccompanied minors in the Western Hemisphere."

Many of those Cuban kids did not see their parents again. Some of their parents were executed. Others spent years in political prisons.

Father Bryan O. Walsh was behind Operation Pedro Pan.  Today, the children of Pedro Pan run a website, support the organization and remember those who cared for them many years ago!

This is the amazing story of 14,000 lives. It shows the evil of the Castro communist dictatorship and the kindness of the many who raised them in the US.

Our friend Victor Andres Trey wrote a book about it many years ago.


See the website (OPERATION PEDRO PAN GROUP, Inc.)
and check the photos. Many of your Cuban friends are in those photos!

By the way, there is a rumor that Castro is very sick. Of course, we've heard that before.

On a more important point, Fidel and Raul Castro are not the only old men in Cuba.  In fact, Cuba has a population problem. See Miami Herald!:

"In a nation faced with chronic shortages of everything from housing to food, more and more women are choosing to have just one child -- or none at all. A country with one of the hemisphere's highest life expectancy rates and lowest birthrates finds itself with a dwindling population -- one that in just 13 years will see the number of retired people outnumber the labor force."


"Fidel Castro wants help from the Church to fight the "plague of abortion" in his country, reported an Italian cardinal at the end of a visit with the Cuban president.

Cardinal Tarcisio Bertone, archbishop of Genoa, spoke of his trip in an interview with the Italian newspaper La Stampa, published Thursday.

"Fidel Castro is asking us for help to combat the plague of abortion in Cuba," he said.

"The spread of abortion, as Fidel Castro emphasized, is among the causes of the country's demographic crisis," the cardinal added. "And it is also a consequence of the plague of sexual tourism."

Why are so many Cuban young women involved in sexual tourism? Could it be that they are working for the "pimp of pimps", or Castro himself.

"Cuba, which has unrestricted access to legal abortion, has an abortion rate of 58.6 per 1000 pregnancies in 1996 compared to a Caribbean average of 35, a Latin American average of 27 (the latter mostly illegally performed), and a European average of 48. Additionally, contraceptive use is estimated at 79% (in the upper third of countries in the Western Hemisphere)."

Yes, Castro leaves a legacy: Abortion, prostitution, political executions and many drowned in the Florida Straits. Of course, the left will always remind us that this is all because of the embargo! 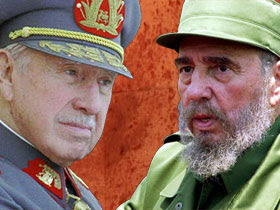 Back in 2006, Pinochet and Castro were seriously ill.   Wonder what they were thinking as they faced the end of their lives?    Castro lived to December 2016 and Pinochet died in 2006.

Yes, Pinochet made mistakes and there were excesses.  Yet, he accepted a public plebiscite in '89 and left power.  Since his departure, Chile has had several elections.

Castro has never had a plebiscite. He will die in power and arbitrarily transferred power to his brother in 2006.

Dictators are dictators. Yet, Pinochet will have a much longer impact than Castro.

On the human rights front, there is no comparison. Yes, we know a lot about what happened in Chile. Why? Because the Chilean press was free to cover the events. Has any free Cuban press ever investigated Castro's prisons?

My guess is that St. Peter will send Pinochet to hell for a short time but Castro will get a one way pass.

You can read more about Pinochet & Castro.