We remember President Andrew Johnson because he succeeded President Lincoln and was impeached and not convicted in 1868.
Yet, he made a decision in 1867 that impacted the 20th century in ways that no one could have imagined.  It may have been as consequential as The Louisiana Purchase of 1803 that doubled the size of the nation.
Back in March 1867, Secretary of State Seward signed a treaty with Russia and purchased Alaska for $7 million.
It was actually a huge bargain but that’s not what they thought back then.
So they called it “Seward’s Folly” or “Seward’s icebox”.
The critics were tough on President Andrew Johnson, too.  They called it his “polar bear garden.”
Less than a 100 years later, or 1959, Alaska became a state and nobody is calling the purchase a folly anymore.
Can you imagine Soviet missiles pointing at the US from north in Alaska? Or more oil fields in the hands of Putin today?
P.S.  You can listen to my show (Canto Talk).  If you like our posts, drop a dime here.

René Monteagudo Miranda was born in Havana on this day in 1916.
He came to the majors as a pitcher but became a pinch-hitter, part-time outfielder and reliever.
The Washington Senators signed Rene and had him pitching in the majors in 1938.   Unfortunately, he hurt his arm and was out of baseball for a year.   He started hitting and playing outfield and came back to the majors with the Philadelphia Phillies, known for a short time as the Blue Jays..    He hit .301 in 193 AB’s.   Rene got the nickname of “versatile” because he could do so many things on the diamond.
So what happened to Rene?   He was banned from baseball.  Rene and another 13 major leaguers signed a contract with Jorge Pasquel, a promoter for the outlaw Mexican League actively trying to raid the majors.      The 13 became the “jumpers”!
Monteagudo played for a while in Mexico but was never given a chance to play in the majors again.
Rene died in Miami in 1973.
P.S.  You can listen to my show (Canto Talk).  If you like our posts, click send drop a dime here.
Posted by Silvio Canto, Jr. Post Link ---> 1:00 AM

Bouton is best remembered for a book that shook up baseball, or "Ball Four".    I didn't like the book but many people loved it.
P.S.  You can listen to my show (Canto Talk).  If you like our posts, click send, and drop a dime here. 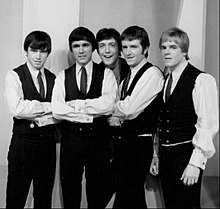 On March 8, 1964, The Dave Clark Five were the second British group to appear on The Ed Sullivan Show.

The story of Desi Arnaz and "Desilu" with Frank Burke, author

By the winter of 1964, my brother and I were attending school in Wisconsin.
It was fun playing football in snowstorms and answering questions about “Ricky Ricardo”, or the only Cuban that any of my friends knew anything about.
Desi was born Desiderio Alberto Arnaz y de Acha III in 1917.  His father was a politician and mayor of Santiago de Cuba, or the second largest city on the island.
In the 1930s, Mr. Arnaz sent Desi and his mother to the U.S.  He joined them a little later.  We understand that Mr. Arnaz had some political problems and decided to take a little “exile” in Florida.
In the U.S., Desi worked in odd jobs and eventually found himself playing “bongos” on stage.
In 1940, he met Lucy and they were married quickly.  They worked separately for most the 1940s until the idea of “I Love Lucy” in 1951.
We also remember him for “Desilu,” the TV company that changed TV and produced many of the sitcoms that we grew up watching.
Desi Arnaz became one of the most successful businessmen and executives of the 20th century.
He died in 1986.
We spoke with Frank Burke, author, businessman & contributor to American Thinker........We remembered Desi Arnaz (1917-1986) and 'I love Lucy' plus the business story of 'Desilu'..........and other stories........click to listen:

On this day in 1932, the most famous baby in the US was kidnapped.


Charles Lindbergh Jr was 20-months old and his disappearance was a front page story for a long time.

It was the kidnap of kidnaps!   Perhaps the crime of the century!