President Biden's speech and the border crisis with George Rodriguez 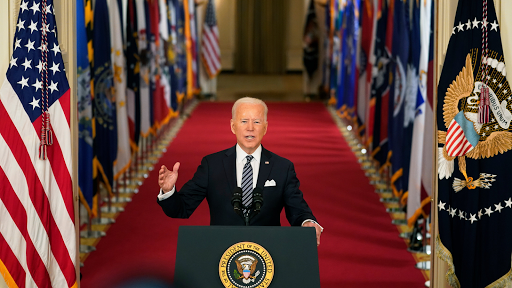 How Biden helps criminals in Mexico

President Biden's border policy is getting mixed reviews south of the border.  The biggest problem is that opening the border may be helping criminal elements in Mexico.  This is from my friend Allan Wall:

On the one hand, the Mexican government likes the U.S. to have a more open border.  On the other hand, that also causes problems for Mexico.

Yes, it causes problems because Mexico will now become the highway to the U.S., from Central Americans to others.

Coincidentally, I spoke with several Mexican friends who have confirmed this.

First, they don't want strangers walking across the country.   I've been told that some of these strangers don't speak Spanish.  In other words, they are not Central Americans.

Second, criminal elements are fully invested in the business of bringing people to the border.  This is "coyotes on steroids" as a Mexican friend said on the phone.  He shared a report that some of these people killed in Southern California recently had paid up to $ 10,000 for the trip to "el Norte."

So how are these people coming up with that kind of money?  I've heard all kinds of horror stories, from mortgaging their farm tractors to paying the balance once they cross the border.

It's a horrible policy that will promote criminal elements in Mexico. We say happy birthday to Jon Provost, known to most of us as "Timmy" in the "Lassie" TV series.     Jon was born in Los Angeles on this day in 1950.

He appeared in many movies and shows later but it we remember that family series. We say a very happy birthday to Mitt Romney, one of the finest men who ever ran for president.      He was born in Michigan on this day in 1947.

Romney was the son of a Michigan governor and 1968 presidential candidate.

He was also a very successful businessman and later governor of Massachusetts.

Overall, a first class guy who would have made a great president.

Sadly, his 2 votes to convict President Trump will probably be what we remember about his career.