Tags: US economy getting better, Jerusalem the capital of Israel, Roy Moore and Alabama, Senator Franken To share or post to your site, click on "Post Link". Please mention / link to the My View by Silvio Canto, Jr. Thanks!
Posted by Silvio Canto, Jr. Post Link ---> 11:30 PM

So, Dems: Remind us when you’ll be invincible again! 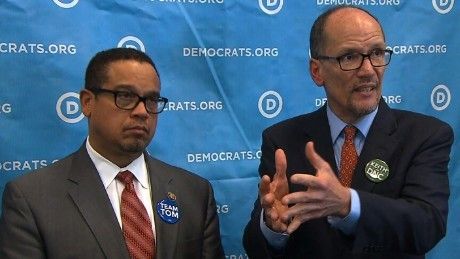 We all remember the one about demographics: how inevitable Democrat victories would come about from coalitions of minority voters.  We were told that the Democrats would run the country for generations, according to the experts.
In fact, James Carville predicted that the Democrats would run Washington for 40 years!  Ruy Texeira even wrote a pretty good book about it.
Well, we know how that one turned out!  The House flipped in 2010.  The U.S. Senate flipped in 2014.  Lots of state legislatures turned, too.  And the presidency flipped in 2016.
The latest from Tom Perez, DNC chairman, and Keith Ellison, DNC deputy chairman, is about unity.  In other words, stick together, and we are inevitable again.
This is from their recent op-ed about the short-term future of the party:

As chair and deputy chair of the DNC, we are committed to ensuring that our party is inclusive, forward-looking and bold in prescribing an alternative to President Donald Trump’s destructive policies and his politics of divisiveness and deception.
We know Democrats can win big in 2018 and 2020, just as we did this year in New Jersey, Virginia and across the country – but we know we can only do that by rebuilding trust with those who share our progressive vision for America and by addressing concerns many have raised in recent years.
Democrats can win big if we’re united, and we know that can only happen by healing divisions that still linger from last year’s bruising presidential nominating contest.

Let me agree that unity is always important.  We could use a little unity on our side, too.  Let me also agree that the Democrats did well in Virginia because of the federal employees who have turned that state around.
Let me disagree as well.  The Democrats do not have a unity problem, because they agree on most things.
Let me take you back to their convention.  Did you hear a prime-time speaker promoting pro-life values or marriage?  On the contrary, the convention was nothing but a certification of what they believe with little if any disagreement.
The party’s problem is that it can’t connect with people who don’t live in cities or go to church regularly.  We have seen article after article since the election stating the same message.  This is from Kim Moody:

To be sure, Clinton won the popular vote nationally, perhaps as John Nichols gloated in the Nation by an “unprecedented” margin that might run as high as two million or more.
The problem is that 1.5 million of that can be accounted for from Clinton’s margin over Trump in New York City alone.
The majorities in the coastal states of California and New York by themselves account for more than her net majority; the rest of the country continues to see its Democratic vote stagnate or decline.

My message to Tom and Keith is that there is a lot more to a Democrat comeback than unity.  They need to connect with the voters who were turned off by President Obama’s policies.  And there are lots of those voters living between the coasts!
PS: You can listen to my show (Canto Talk) and follow me on Twitter.
Tags: Diversity not unity is what Democrats need To share or post to your site, click on "Post Link". Please mention / link to the My View by Silvio Canto, Jr. Thanks!
Posted by Silvio Canto, Jr. Post Link ---> 11:00 PM

Let me tell you about my posts and podcast

Let me tell you about my posts and podcast: https://t.co/SHxlioPHOn via @YouTube
— Silvio Canto, Jr. (@SCantojr) December 10, 2017

P.S.  Check out my blog for posts, podcasts and videos. If you like our posts, please look for ”Donate” on the right column of the blog page.
Posted by Silvio Canto, Jr. Post Link ---> 10:30 PM

Jack Morris and Allan Trammell arefinally in The Hall of Fame, as we were happy to hear from MLB today:

Morris & Trammel were on the 1984 Detroit Tigers who won the World Series.   They are two great selections all around: