The FBI Director in Congress, Senator Franken and other stories of the day

Lindsey Vonn, wearing a Red Bull hat, said that she's representing the people not the president at the Olympics

Silly girl....This is why athletes should stay out of politics.....Lindsey Vonn, wearing a Red Bull hat, said that she's representing the people not the president at the Olympics....so what about the Red Bull consumers who voted for Trump? should they consume another beverage?
— Silvio Canto, Jr. (@SCantojr) December 7, 2017

According to a lawsuit by an advocacy firm, less than half of California students from 3rd to 5th grade have met statewide literacy standards since 2015......not good at all.........maybe the teachers' union should focus on teaching rather than campaigning for Democrats.......
— Silvio Canto, Jr. (@SCantojr) December 7, 2017

Turning Virginia blue one bureaucrat at a time!

A few weeks ago, we watched Democrats take another step into making Virginia permanently blue. They had a great turnout, lots of victories and set the table for Virginia to go blue in 2020.
We’ve heard a lot about the growing number of federal employees who live in Virginia. They are also voting and donating to Democrats in large numbers, as David French wrote:

While there are certainly some biased, partisan conservatives in the federal bureaucracy, the ideological imbalance in the civil service is striking. It’s not quite at university-faculty levels, but it’s getting close.
For example, in the 2016 election cycle, Hillary Clinton received an astounding 95 percent of all federal-employee donations.

Over at the Department of Justice, it is 90%! The DOJ is where the investigations happen.
Is it unreasonable for people who live in the “flyover country” to be skeptical of lawyers and bureaucrats in a department that donated 90% to Mrs. Clinton?   As French wrote, there is also a terrible danger of “groupthink” under such circumstances. It discourages creativity, specially if the person proposing a new idea does not support the favored candidate.
Beyond turning Virginia, and most of Maryland suburbs rather blue, this is a threat to our democracy.
How can a federal bureaucracy be so different than the people that they are serving?
President Trump won 31 states or 306 votes. On a county by county basis, the U.S. is a red sea with islets of blue.
Shouldn’t the bureaucracy reflect some of that vote? I understand that we’ve just finished two terms of a very partisan Democrat who used the bureaucracy to go around Congress, from immigration to ObamaCare. I further understand that it will look a bit more balanced after President Trump’s, hopefully, two terms.
We’ve often mentioned that there is a lack of political diversity in our university staffs. I would argue that the media could use a little political diversity. Absolutely, the federal bureaucracy would benefit from some diversity as well.
P.S. You can listen to my show (Canto Talk) and follow me on Twitter.

Pearl Harbor is a great opportunity to chat with your Cuban parents & "abuelos" about that day! 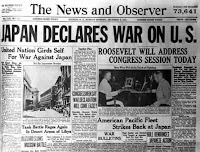 On December 7, 1941, my father was 15 and my two uncles were 13 and 11 respectively.
Like so many other “Jesuit School” boys growing up in Sagua La Grande, Cuba, they went to mass that Sunday and came home to eat Abuela Senda’s lunch.
We’ve heard that her lunches were always delicious. They probably included some of that sea food that Abuelo Silvio used to buy at the fish market.
They got the news of the attack on the radio.  It was one of those “breaking news” flashes that interrupted routine programming.
Cuba eventually declared war too.   In fact, Cuba became a target of U-2 Subs because of the supply line to the US.   Therefore, some Cuban merchants like “Santiago de Cuba” and “Libertad” were hit by German submarines!
Our parents and grandparents lived through WW2, too!   Ask your Cuban ‘abuelos” or “padres” about that day.  They will tell you a story or two!
P.S.  You can listen to my show (Canto Talk).  If you like our posts, click send drop a dime here.
Posted by Silvio Canto, Jr. Post Link ---> 4:30 AM