Guests: Carlos Torres & David Busby join me for a look at Dallas Ft Worth sports and other stories............click to listen:

Maybe the Democrats are telling us something!

Is reality finally sinking in?
Let me share a couple of stories from this week.
Over in New York, they want to investigate everyone who had a cup of coffee with then private citizen Trump or his family.   Investigating Trump is about all you hear from New York’s leaders, especially Attorney General Letitia James who is a woman on a mission.
At the same time, the typical New Yorker would rather see his or her leaders concentrate on the state’s high cost of living.   They are voting this way by looking to move out of state:  A third of New Yorkers want out!
Another story is that support for impeachment is down among Democrats, according to this article over at CNN:

Support for impeaching President Donald Trump has fallen 7 points since December, a CNN Poll conducted by SSRS finds, following Speaker of the House Nancy Pelosi calling impeachment “so divisive to the country.”
The decline — from 43% in favor in December to 36% now — stems largely from a change in Democratic views on impeaching the President.

So what’s going on?   Is there a connection between these two stories?
Yes, I think that two things are going on.
Democrats are voting with their feet and telling their “blue leaders” to govern, from health care to encouraging Amazon to bring jobs!
It raises a question:   Is there room for a Democrat presidential candidate who runs on a message to cut taxes and stop investigating for the sake of investigating?
I don’t know, but Democrats are telling us something and no one running for President is hearing it.
P.S.  You can listen to my show (Canto Talk) and follow me on Twitter.
Tags: Maybe the Democrats are telling us something! To share or post to your site, click on "Post Link". Please mention / link to the My View by Silvio Canto, Jr. Thanks!
Posted by Silvio Canto, Jr. Post Link ---> 10:30 PM

It’s time for another article about change coming to Cuba 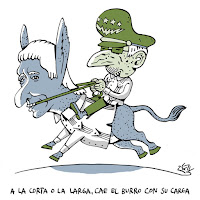 Like some of you, I check social media for Cuba updates.
This is the latest I found a.k.a as change is coming in Cuba:

Cuban legal experts say they expect the government to send the National Assembly between 60 and 80 proposed laws over the next two years. They told The Associated Press that these measures, when approved, would replace laws considered outdated.
The assembly is almost sure to approve all government proposals, as it has for years.
“I expect to see big changes in Cuba with the new constitution,” said Julio Antonio Fernandez, a law professor at the University of Havana. “A new state structure, a transformed political system, led by the Communist Party, of course, but different and confronting big challenges,” he added.
One of the first changes will be in Cuba’s political system. In the next five months, the government is required to pass a new electoral law. The measure would split the duties of head of state and government between the current president and a new position of prime minister.
Also, new governors will replace the Communist Party first secretaries as the highest official in Cuba’s 15 provinces.
The Communist Party remains the only political group permitted in the country. However, the wording in the new constitution could give voters a choice among different Communist Party candidates instead of just voting “yes” or “no” for a single candidate chosen by the government.

So let me translate.
Change is coming but The Communist Party will stay on top and going nowhere; and,
Electoral reform is coming but you will choose between two communists for office. Yes “Fidel A” vs “Fidel B”!
Change?   Not really!   Just more of the same that we’ve seen before.
P.S.  You can listen to my show (Canto Talk) and follow me on Twitter.
Tags: It’s time for another article about change coming to Cuba To share or post to your site, click on "Post Link". Please mention / link to the My View by Silvio Canto, Jr. Thanks!
Posted by Silvio Canto, Jr. Post Link ---> 8:00 PM