Afghanistan plus Texas politics with George Rodriguez from South Texas 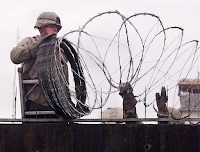 Friday's video:
Afghanistan will collapse soon
Click to watch
You can to my show (Canto Talk).  If you like our posts, click send, and drop a dime here.
Posted by Silvio Canto, Jr. Post Link ---> 10:30 AM

Did Cuomo open the door for Tara Reade?

As a wise man said, be careful what you wish for because you may get it.  Will Gov. Andrew Cuomo's exit open the door for Joe Biden's accuser, Tara Reade?  Well, Tara is hoping that it does.

This is from The Daily Mail:

Tara Reade demanded shortly after Governor Andrew Cuomo's resignation on Tuesday that her sexual assault allegations against Joe Biden be fully investigated and that the president also step down.

'My heart is with the brave Cuomo survivors who endured attempts to discredit them like I did coming forward about Joe Biden with the help of nonprofits that were supposed to help women like Time's Up,' Reade told Fox News.

'May there be some measure of justice for the survivors,' she added.

The 57-year-old revealed last year her accusation that Biden sexually assaulted her in 1993 in a Capitol Hill office when she was a Senate staffer.

Let me take a guess and say 'yes.' In other words, Tara may finally get her turn.

First, I don't know whether Tara is telling the truth or not.  At the same time, "truth" was never a consideration when the press and the Democrats went after Brett Kavanaugh with all those phony stories. So let the lady make her case.

Second, and more important, the media is bored with President Biden.  Worse than that, no one is watching, so a lot of reporters are scared to death that their jobs may be on the line.  President Trump was great for the people who sold air time.  Biden is the exact opposite.

What better way of getting people to watch than to start talking about another woman and another politician?

The media is desperate for something and Tara may just be the answer.

The Berlin Wall is something I grew up talking about.  It’s a little bit different for my sons.  In fact, our 3rd son was born the year after the Wall came down in the fall of 1989.

The construction of the Berlin Wall started on this day 1961 and the first casualty came in August 1962.    It happened when two young men tried to escape.  One young man made it to the other side.  Unfortunately, the other was shot in the back and bled to death.


From 1961 to 1989, the Wall was an international symbol of freedom.  You had free people on the Western side and a repressive state on the East.   It was clear to most of us that this wall meant something.

I don’t expect future children to have the same passion about the Berlin Wall that my parents or I had.   We are just hoping that they learn about The Berlin Wall, its meaning, the people who died attempting to cross into freedom and how bipartisan policies of containing communism brought down the wall.

We can not forget those who were killed crossing this wall because they wanted to be free.