Don't mess with her cubs 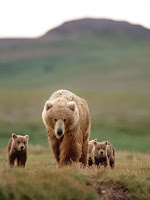 My late mother must be enjoying the governor's race in Virginia.  I think she would tell me something like "don't mess with the lioness's cubs" or "attack my kids at your peril."  One of my favorite memories is watching her tell a Cuban Communist Party block leader that he'd indoctrinate her kids over her dead body.  The communist walked away because he saw that my mom was dead serious.

Do you want to understand Virginia?  Don't mess with mothers, especially when the household is paying property taxes to fund public education.  It's a beautiful uprising of mothers defending their kids and not taking any crap from anybody.

The Democrats are in full panic mode.  It does not matter who wins anymore because these mothers are alive and well from coast to coast.

This is from the AP:

McAuliffe, who served as governor from 2014 to 2018, and Democrats are scrambling to stave off disaster after public polling has shifted in Youngkin’s direction in recent weeks. Republicans are optimistic about their chances in the commonwealth, where they haven’t won a statewide race since 2009.

Yes, disaster like low black turnout.  This is from Politico:

More than a dozen top Democrats involved in the Virginia gubernatorial race expressed concern about Democrats' standing with Black voters.

According to the article, many black voters are just frustrated with Washington politics, whatever that means.  My guess is that they are more frustrated with their party aligning around "defund the police" and how crime is destroying their neighborhoods.  Also, I wouldn't be surprised if a lot of black parents are also fed up with having their kids treated like poor victims.

Last, but not least, there is Joe Biden, who has lived up to what former president Obama allegedly said: "Don't underestimate Joe's ability to [expletive] things up"!

Youngkin will win.  He should bring one of those moms to the podium and give the credit to the ladies who drove this campaign.  It's like Audie Murphy thanking the ladies in The Guns of Fort Petticoat.