Wednesday's video: Too angry an too much about Trump

Wednesday's video:
Too angry and too much about Trump
Click to watch:
P.S.  You can listen to my show (Canto Talk).  If you like our posts, click send, and drop a dime here.
Posted by Silvio Canto, Jr. Post Link ---> 11:30 AM

Too angry and too much Trump 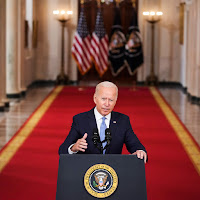 Once again, President Biden addressed the nation in the afternoon. I remember when presidents gave those speeches on prime time or at a time when people are actually watching TV.  So Joe is on TV again, and most people didn't watch him.  I listened to it on the radio, and it sounded as though he was screaming rather than speaking.

Overall, it was a disappointment.  It was such a mess that Meghan McCain, the late senator's daughter, made an amazing disclosure:

"This is extremely difficult for me to say: I once thought I truly knew Joe Biden and he helped me through pain and grief, for which I am grateful," McCain wrote. "This man on tv giving this speech, I do not recognize this man."

Glad to have Meghan back on our side.  Wonder how many of the Biden voters agree with her?  I just heard former senator Joe Lieberman on a Bill O'Reilly podcast, and he is frustrated, too.

The president's speech was too long.  It would have been better to watch a president address the nation on prime time, but maybe the White House does not think he can.  I hate to be cynical, but what else could it be?  What president turns down a prime-time speech?

The president's tone was angry.  Why?  We need a serene leader, a man who will calm us down rather than one who blames his predecessor, as KT McFarland wrote:

No one expected him to be Winston Churchill rallying the British after Dunkirk nor Abraham Lincoln consoling the nation after the slaughter at Gettysburg, nor did anyone expect something like Ronald Reagan's eulogy at the Tomb of the Unknown Soldier a decade after the tragic Vietnam War. But he could have at least been straight with us.

Instead of speaking to a nation in pain, President Biden made this speech all about himself. He dodged and weaved, blamed others, and even claimed our evacuation from Afghanistan was a great success, while most everyone else saw it as an unmitigated disaster.

President Biden missed a great opportunity to heal the nation, especially days after 13 young Marines were killed.  Instead, he went off on Trump, spoke poorly of a war that he voted for, and did nothing to unite the nation.

And now for the refugees

And now for Chapter 2 -- the refugee story.  Over the weekend, I heard someone on TV talking about Europe potentially flooded with new refugees.  He based his prediction on what happened after President Obama left Iraq, unleasehd ISIS, and thousands got to Europe any way they could.

Maybe it won't happen the same way, but refugees are coming, as we see in this BBC report:

Thousands of people are scrambling to flee Afghanistan after the Taliban seized back control of the country, almost two decades after they were ousted by a US-led coalition.

The United Nations has warned that up to half a million Afghans could flee the country by the end of the year and has called on neighbouring countries to keep their borders open.

The current crisis comes on top of the 2.2 million Afghan refugees already in neighbouring countries and 3.5 million people forced to flee their homes within Afghanistan's borders.

At the moment, the exact numbers are unclear -- but we do have some detail on how many people have been airlifted out of the country.

The US says it has facilitated the evacuation of more than 110,000 people from Kabul airport, currently the only operational one in the country, since 14 August -- although it's not clear how many of those were Afghan nationals.

The UK Ministry of Defence says it has flown out more than 15,000 of those people and some 8,000 of them were Afghan nationals.

What happens now?   I don't know, but it will be interesting.

Back in the late 1970s, many Vietnamese, and later Cambodians, fled Southeast Asia and came to the U.S.  Over the years, these arrivals became very successful business owners and their kids are often on top of the public school classes.

What about now?  Let's wait and hope for the best... but the refugees are coming.