Tuesday's video:    The Ukraine crisis
P.S.  You can listen to my show.  If you like our posts, please look for ”Donate” on the right column of the blog page.
Posted by Silvio Canto, Jr. Post Link ---> 11:30 AM 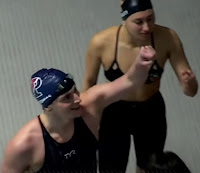 We don't expect President Biden to say something about young men swimming as young women in the middle of the Ukraine crisis.

He's got a few other problems on his plate, too, from high gasoline prices to a general discontent from coast to coast.  Sooner or later, President Biden should offer a comment about it.

Maybe a reporter can ask President Biden if he is happy about the way things have turned out in college sports.

This is from Fox News:

Thomas, who previously competed on the University of Pennsylvania's men's swim team, has shattered multiple records since undergoing a gender transition and switching to the women's team.

In the past week, Thomas won Ivy League championships in three different events, breaking multiple records in the process.

Other UPenn swimmers and women's sports advocates have pointed to Thomas' dominance in calling to tighten NCAA rules on transgender athletes competing in female sports.

The White House didn't return Fox News Digital's request for comment on whether the controversy swirling around Thomas has impacted Biden's position on transgender athletes competing in female sports.

During Biden's 13 months in the White House, his administration has aggressively sought to ensure that biologically male athletes who identify as transgender girls are allowed to compete in female athletics.

So let's ask him:  Is this Mission Accomplished, Mr. President?  Are you happy for the young women who are watching a young man shatter their dreams, hopes and scholarships?   How does the first lady feel about this?  Or your granddaughter?   Or what about the vice president?  Where does she stand on this?  Speaker Pelosi?  The Squad?

When does a college basketball team made up of transgenders win the Women's Final 4?   Stay tuned because it's coming a lot of faster than you realize.

In the meantime, tell your athletic daughter that elections have consequences.  Maybe she will remember that in November.