Biden vs Paris debate thoughts and other stories

Biden vs Paris debate thoughts and other stories 10/08 by Silvio Canto Jr | Politics: 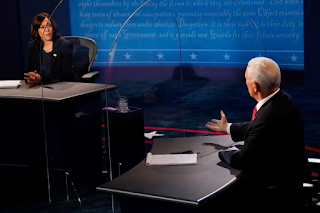 Maybe the NBA Commissioner got woked between the eyes

Maybe the NBA commissioner got "woked" between the eyes

Maybe the advertisers are texting NBA commissioner Adam Silver about the lousy ratings.  Or maybe Mr. Silver finds Lebron James as obnoxious as the rest of us.

One way or another, the "social justice" won't be back next season, according to Mr. Silver:

We’re completely committed to standing for social justice and racial equality and that’s been the case going back decades. It’s part of the DNA of this league. How it gets manifested is something we’re gonna have to sit down with the players and discuss for next season. I would say, in terms of the messages you see on the court and our jerseys, this was an extraordinary moment in time when we began these discussions with the players and what we all lived through this summer. My sense is there’ll be somewhat a return to normalcy, that those messages will largely be left to be delivered off the floor.

Is he saying that "woke" has an expiration date?

Silver should have followed his "return to normalcy" statement with a couple of suggestions for the players:

First, get active in the community by committing one day to chat with young men; and,

Second, sit down with the police chief and offer your assistance at improving relations.

In the meantime, we are happy to see that the NBA will be playing basketball next season.  Will the fans come back?   Honestly, I am not sure.