The 2020 elections after Super Tuesday with Barry Casselman The Prairie Editor 03/13 by Silvio Canto Jr | Politics:

A ray of hope in Uruguay

Some of you may remember hearing about Montevideo, Uruguay, in Sherlock Holmes’ “The Woman in Green” or reading about Nazi leaders hiding there.
Other than that, Uruguay is a small nation of great “futbol” players, wonderful beef, and most people are of European descent.
Some call it “little Argentina” but the people of Uruguay naturally reject that.  They believe in their identity and they are correct to do so.
Last week, Uruguay inaugurated a new president and he quickly rejected 21st-century socialism.  This is from PanAm Post:

As of Sunday, March 1, there is a new president in Uruguay. The freshly elected Luis Lacalle Pou explicitly said that Nicolás Maduro, Raúl Castro, and Daniel Ortega were not invited to the inauguration ceremony, and that is how it was. The anthem echoed with greater fury than usual, particularly the stanza “tyrants tremble.”

It did not take long for the left to throw a “temper tantrum” when President Jair Bolsonaro of Brazil was invited instead of Bolivia’s former leader Evo Morales or the aforementioned “lefty trio” of Raul, Nicolas, and Daniel.
By the way, President Bolsonaro drives the left crazy — sort like President Trump up here.
A couple of Uruguayan friends told me on social media that their countrymen decided to end 15 years of complicity with Venezuela, Cuba, and Nicaragua.
It was more than a friendship.  Some were angry that the left had allegedly taken money from the late Hugo Chavez.
They also added something very interesting.  The new President and beautiful First Lady rode into town praising the nation’s traditions and flag.  In other words, they were rejecting the left’s attacks on family values and traditions.
Yes, Uruguay is a small nation.  However, it’s nice to see people rise up and reclaim their heritage.
Congratulations to Uruguay!
PS: You can listen to my show (Canto Talk) and follow me on Twitter.
Posted by Silvio Canto, Jr. Post Link ---> 10:30 PM 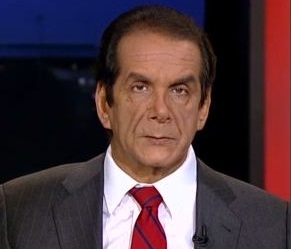 We remember the great Charles Krauthammer, one of the best political commentators.      He was born on this day in New York City in 1950.

It was Dr. Krauthammer who coined the phrase "Bush derangement syndrome" in 2003.   He was reacting to the irrational behavior of so many Democrats.

We also enjoyed his commentaries on the "Fox Report".

Last, but not least, Dr. Krauthammer published a best seller a couple of years before his death in 2018.