The 2020 election and Halloween with Leslie Eastman, Legal Insurrection

Wednesday’s video: Biden and more nonsense about the courts 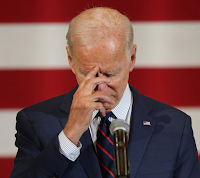 Have you ever seen a man more confused than Joe Biden over answering the court packing question?

First, he was going to tell us after the election.

Then, he said that he'd put together a commission for recommendations.

And now, he is going to rotate the judges.   This is from the New York Post:

Just hours before the expected Monday evening confirmation of Judge Amy Coney Barrett, President Trump’s third conservative nominee to the High Court, Biden was asked if he was open to term limits for justices.

“It’s a lifetime appointment, I’m not going to attempt to change that at all,” Biden said at a campaign stop in Chester, Penn.

But he added, “There is some literature among constitutional scholars about the possibility of going from one court to another court, not just always staying the whole time in the Supreme Court.”

So we are going to move justices from one court to another court?

Maybe we will trade Justice Clarence Thomas to the 9th in California in exchange for a couple of judges and a judge to be named later?  Or maybe we will send justices down to the appellate courts to work on writing better opinions?

It's insane, to say the least.  The real scandal is that Biden is never challenged after all.  He makes the statement and then takes no questions!