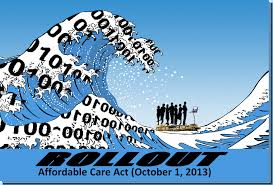 One of my favorite Cuban expressions is "arroz con mango",  or a very sticky or messy situation.  Frankly, everything about "the roll out" has the look of a disaster, or "un arroz con mango" as we say in "cubano".
ObamaCare was destined for disaster because it was never openly discussed in Congress, i.e. no open hearings.
No experts were brought in to argue for this and that.  Instead, it was rushed through Congress and passed in the Senate by offering special arrangements to Senators.
Remember The Louisiana Purchase?  or that special "Cornhusker kickback"?  The Obama administration had to use these tactics to pass the bill.  They passed the bill in the House by 4 or 5 votes despite having a 40-plus majority!
Today, we can tell you that the roll out has been a disaster, from "glitches" to so called "isolated" problems.

According to insurance industry sources, the problems are not "isolated" at all:

"An executive of the largest contractor working on the federal health insurance exchange web site told Congress Thursday that problems with erroneous enrollment information being transferred to insurance companies were “isolated” - a claim later echoed by an Obama administration official.

But insurance industry officials have told the Washington Examiner that this is simply not true. The problems – such as duplicate enrollments being sent from the federal system to insurers, incorrect cancellations, and spouses being mixed up as children – were in fact being widely encountered across the insurance industry."
Furthermore, we hear of a "tech surge", or an additional commitment of technical personnel to make the web site work.

The jury is still out:  Will the surge work or are we just throwing more money away:

"President Obama's "tech surge" to turn around the failing HealthCare.gov is running into concerns that the administration could be throwing "good money after bad" while complicating an already complicated situation.

Tech experts who spoke with FoxNews.com say that, like any good military strategy, this "surge" is not just about the number of soldiers, but how they're used. The administration's plan to enlist a team of experts and specialists from both the private and public sector could be a big waste of money if they aren't used correctly.

"If you start throwing people in and start having them just fixing bugs it could be a recipe for disaster where you end up with more bugs than when you started," explained James Turner, a member of the technical staff at software company Beeonics and contributing editor at O'Reilly.com."

Last, but not least, we hear that the website may not be ready until the end of November:

"The Obama administration said Friday it will take until the end of November for the new federal health insurance Web site to be fully fixed, and that a private contracting firm would be managing the effort."
Let's officially call the ObamaCare rollout one nasty "arroz con mango".
My question is very simple:  Who cooked this "arroz con mango"?
Who is going to be held responsible for this very expensive and embarassing "arroz con mango"?
P.S.   Click here for our discussion with James Yardley, contributor to American Thinker.