Trump in Mexico: The hysteria continues 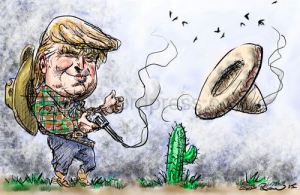 (My new American Thinker post)
In Spanish, we say that someone will pay for the broken dishes, i.e. “pagar los platos rotos.”  It’s sort of like saying that someone will get blame for a bad idea.
We just learned that the person paying “los platos rotos” in Mexico is Luis Videgaray, Mexico’s finance minister.   He will pay the political price, especially now that Mrs. Clinton has left President Pena-Nieto without a Democrat to share the stage with.  My guess is that President Pena-Nieto had hoped to use Mrs. Clinton and gang up on Mr. Trump.  Unfortunately, Mrs. Clinton is not travelling to Mexico and the plan has backfired.
Here is the news from Mexico:

The resignation comes a week after the meeting between Mr. Peña Nieto and Donald J. Trump, which engendered widespread dismay and anger among Mexicans and reportedly divided Mr. Peña Nieto’s cabinet. It was Mr. Videgaray’s idea to invite Mr. Trump, according to several Mexican news media reports, though Mr. Peña Nieto later claimed it was his own.
Mr. Peña Nieto was scheduled to make a statement at 11 a.m. Mexico City time (noon Eastern), and is expected to name José Antonio Meade, Mexico’s social development minister, to replace Mr. Videgaray as finance minister.

So much for reading recently that Mr. Videgaray was a strong ally of President Pena-Nieto!
Mexico’s reaction was hysterical and totally silly.  As Allan Wall reminded us, maybe President Pena-Nieto is hedging his bets and looking ahead to a very different future:

There are signs that the Mexican presidential administration realizes that, and is hedging its bets.
One is the promotion of the Somos Mexicanos program designed to help Mexicans returning to Mexico from the United States.  I last visited Mexico this past June and July.  When entering Mexico, I noticed the Mexican immigration station had been remodeled to include a section for Repatriaciones (repatriations).
Does that mean the Mexican government is expecting larger numbers of Mexicans to return to Mexico?

Allan Wall has a point. I would add a couple of things.
Illegal immigration looks different today than it did years ago.  In other words, most of the people reaching the US are not Mexicans.  They are Central Americans using Mexico as a pathway to the US.  This is creating serious challenges for Mexico, from police resources to immigration court dates.  Frankly, Mexico now faces the difficulty of not knowing who is in the country.
Border lawlessness has infected the Mexican political system.  Cartels are going north and south of the border without consequences.  They bring dollars into Mexico that corrupt the politicians, specially in smaller towns run by cartels.
Trump’s language could have been more polite a year ago.  However, his message of a lawless border is one that the Mexican political class hears and understands quite well.  After all, as Allan Wall wrote in the aforementioned article, have we not heard talk of Mexico building a wall in its southern border?
P.S. You can listen to my show (Canto Talk) and follow me on Twitter.
Tags: Trump in Mexico  To share or post to your site, click on "Post Link". Please mention / link to the My View by Silvio Canto, Jr. Thanks!
Posted by Silvio Canto, Jr. Post Link ---> 7:30 AM

My memories of Mexico's immigration laws


According to news reports, Mexicans are scared of Donald Trump:

The longer he floats atop the polls, the more Trump has started to make people here feel a bit queasy, forcing them to contemplate whether his candidacy is really something they need to worry about.
As Trump published his immigration proposals this week, Mexicans expressed growing concern about his bid for the Republican nomination.

I guess that they fear that illegal immigrants will be deported and flood their northern states with people. In other words, they fear that the U.S. will be like Mexico and deport
those in the country illegally.


For the record, I do not support mass deportation. There are better ways of dealing with illegal immigration, such as making life miserable and very costly for the employers who continue to hire them. They will go back when the jobs disappear!


Also, I do favor a modest legalization for some of the kids who are excelling in schools or wish to serve in the U.S. armed forces.


And I favor the reenactment  of the "brasero" program that was so effective in the 1950s. It brought Mexicans here legally to work and they went home with their wages.

For more on "the brasero" program, read John Fund.  The brasero program was cancelled by Democrats pandering to the labor unions in the mid-60s.


Nevertheless, the Mexican reaction to Trump's deportation idea takes me back to a time when I worked in Mexico.


A few years ago, a U.S. company took advantage of my Spanish and sent me to Mexico. It was a great experience.


I recall going down to the Mexico consulate to fill out the paperwork. I had to prove that I wouldn't be a burden to Mexico, It felt like I was applying for my first mortgage loan, specially given all of the economic information that I had to provide.


Once in Mexico, our company attorney came by once a year and we filled out more paperwork. It was to prove to the Mexican government that we paid our taxes, stayed out of trouble, and did not engage in political activities, i.e. Article 33 of the Mexican Constitution forbids foreigners from domestic politics.


Furthermore, my business visa clearly said that I was to carry it with me just in case I had to prove that I was in the country legally.


I recall our Mexican attorney discussing Article 67 with us:


Under Mexican law, Article 67 reads, “Authorities, whether federal, state or municipal, are required to demand that foreigners prove their legal presence in the country, before attending to any issues.”" (via CNN)

Again, I had a great time in Mexico. Loved it. I did not mind that I had to respect their immigration laws. After all, wasn't I a guest in their country?

It seemed totally logical to me that I had to respect their laws living in their country. It never occurred to me to march down the street with a U.S. flag complaining about Mexican laws!


We read a recent story that Mexico now deports more Central Americans than the U.S.:


Between October and April, Mexico apprehended 92,889 Central Americans. In the same time period, the United States detained 70,226 "other than Mexican" migrants, the vast majority from Guatemala, Honduras and El Salvador.

Mexico has a very tough policy against illegal immigration. And there is nothing wrong with that! Every sovereign country has the right to decide who comes in and how long they stay. Controlling your borders is the essence of sovereignty.


It's time for the U.S., and our elected officials, to defend our right to have immigration laws. And to say so publicly!  I fear that our wimpy political class, intoxicated with a heavy dose of PC, is too quiet about the U.S.'s right and duty to protect its borders.


As a legal immigrant, and naturalized citizen, I understand the contributions that we've made to the U.S. At the same time, let's get serious about immigration laws and their usefulness in the real world.