Tuesday's show: A chat with Fernando Hernandez: " Cuba and the USA: A Musical Journey"

A country without statues is not much of a country 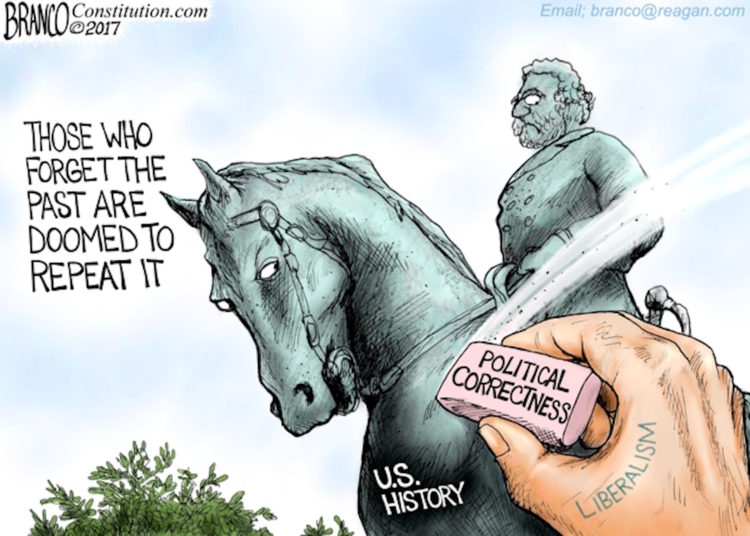 Before he passed away, my father and I had long chats about a lot of things. He didn’t have a lot of energy but he did say a lot of great things.
My dad would often watch Fox News and we’d chat about the news segment. On one occasion, we spoke about taking down statues. He said that statues are like family photos or remind of where you came from. You can’t delete them any more than you can erase that family member that you are not proud of. My dad warned me that this movement will eventually divide the country into factions.
And yes, my father was right. We need to be very cautious about erasing the past.
The latest news on this front is about native Americans and the town of Arcata, California, as we see in this Los Angeles Times report:

No other city has taken down a monument to a president for his misdeeds.
But Arcata is poised to do just that.
The target is an 8½-foot bronze likeness of William McKinley, who was president at the turn of the last century and stands accused of directing the slaughter of Native peoples in the U.S. and abroad.
“Put a rope around its neck and pull it down,” Chris Peters shouted at a recent rally held at the statue, which has adorned the central square for more than a century.

Lynch McKinley? All I can say is wow and who is next?
There are two problems here with this movement — historical ignorance and a lack of parental guidance!
First, these people do not love their country. So what country do they love? As I recall, Geronimo did not allow dissent or an opposition party. They present a false view of the past, or “white man is bad” and “everybody else is a victim.”
Second, the Democrat Party is so corrupt at the core that it won’t stand up to these clowns. The “statue” movement is desperately in need of a real liberal who stands up and says “enough.”
Wonder when we take down President Truman because he bombed Hiroshima?
P.S. You can listen to my show (Canto Talk) and follow me on Twitter.
Posted by Silvio Canto, Jr. Post Link ---> 10:30 PM


Rick Moran hit this out of the park. See THE TIME FOR EVASION IS OVER:


"After three years of carping, harping, caterwauling, criticizing, not to mention spinning ever more outrageous and fantastical conspiracy theories about the war, it is time for the Democrats to stand up and do what they say they’ve been sent to Washington to do; get us out of Iraq.

Now is the time we find out whether the Democrats are a bunch of gutless cowards whose political calculations about “supporting the troops but not the mission” has any meaning beyond the sound bite culture of Washington and political campaigns.
Now is the time we discover whether Democrats have the courage of their convictions and truly believe that the war is a lost cause, necessitating the immediate withdrawal of our forces."

Show me some spine, my fellow Democrats!

For sometime, Jimmy Kimmel's show is all about attacking President Trump.   In my mind, it's OK for a comedian to attack the President of the US.   I don't have to watch it if I don't like it.  So I don't watch Kimmel.

It's another story to take a cheap shot at The First Lady.

This is really stupid and confirms the left's double standard.   This is from Jimmy Kimmel's show:


On Monday, the White House held its 140th annual Easter Egg Roll. The event, hosted by Melania Trump, featured children adorably pushing eggs along the White House lawn.
In a bizarre response, late night talk show host Jimmy Kimmel launched an attack on Melania Trump over the event.
First he derided Melania as being uninvolved in the set-up of the event. “Not a chance she did one thing to help set that up. There's no -- she didn't dye eggs, she didn't fill baskets.”
Did Michelle Obama dye eggs or fill baskets? Where was Kimmel to question her efforts during the eight years of the Obama administration?
Next, Kimmel mocked Melania Trump’s accent. This type of anti-immigrant attack is only OK for leftists to make on people like Melania.

Really Kimmel?    Is that the best that your comedy writers can do?

Maybe Colon can play second or LF or RF!

Put Bartolo at second: Five games and the Rangers look awful. In fact, Bartolo Colon's 6 innings is the highlight of the young season. Maybe Bartolo can play second or LF or RF! Seriously, it's bad for the home team after 5 games. Thank God there are 157 games left!
— Silvio Canto, Jr. (@SCantojr) April 3, 2018

The New Orleans Saints' fans are having a great time. Their team is playing great and everybody loves it!


16 months ago, New Orleans was hit by Katrina and we know the rest of that story.

It's time for the Saints to play in the Super Bowl!

January 2007: A few more thoughts about the Hall of Fame vote

Mark McGwire is out as was expected.   I believe that the Hall of Fame will come down very hard on McGwire, Palmeiro and Sosa.  In fact, we may have 3 of the Top 10 HR hitters out of the Hall of Fame.  Of course, I have not mentioned Bonds, who has some other problems.


Like Tony Oliva and Dick Allen, David Concepcion should be in the HOF.


Can you think of a better shortstop in the 1970s? Robin Yount is the only name that comes to mind. Who was better than Concepcion? Who was more complete?

Speaking of Dick Allen, See The Greatest Player Who Isn't in the Hall of Fame:


"Richard Anthony "Dick" (aka "Richie") Allen played for just 10 full seasons yet led his league in home runs twice, RBIs once, on-base average twice, and slugging three times. He was also named the 1964 National League Rookie of the Year and the 1972 American League MVP. As his record stands, a great many baseball historians would argue Allen was the best hitter in baseball between 1964 and 1974."

What a coincidence.   Oliva and Allen were the AL and NL Rookie of the Year in '64.   Allen and Oliva played in the late 60's when pitchers dominated baseball.

Anyway, I hope that the veterans committee will reconsider Allen, Oliva and Concepcion. They deserve to be in Cooperstown.