The Castro Regime and Business 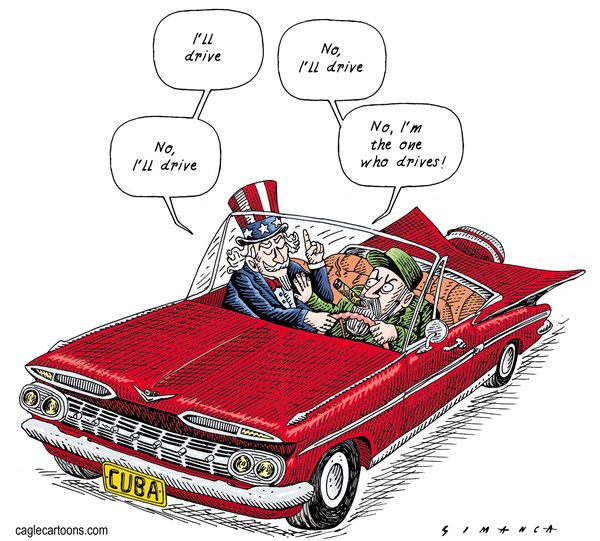 (My new American Thinker post)
Last December, many welcomed President Obama’s opening to Cuba as an opportunity to bring prosperity to the island. It went something like this: American tourists will spend money in Cuba and freedom will blossom. The other version went like this: our past approach has not worked so let’s try something new. Another one went like this: Cubans will talk to Americans and demand multiparty elections and a free press.
Sorry, but U.S.-Cuba relations have not worked out as planned or dreamed. There are two big reasons. The first reason is that the Castro regime is not about to relax political control. On the contrary, there has been a rise in repression and more and more dissidents find it difficult to express themselves. The second reason is that the Castro regime wants to keep control of the cash flow. This is from Fox News Latino:

And why not?  The Obama approach has been completely one sided. The U.S. gives up everything and Cuba gives nothing. The Castro brothers have concluded that they will ask and Obama will provide. So far so good for the dictatorship.
The Cuban government needs these state enterprises under the Castro Inc. holding company. It allows the Castro brothers to get wealthy, it keeps property ownership from the Cuban people and turns the island into a Spanish speaking Vietnam with good baseball players.
Mauricio Tamargo, an attorney, wrote recently about Cuban finances,or better put, the Castro family finances:

Again, why should the Cuban government want to give up control of the economy? “Fidelismo” has been very good for the family bank accounts, the gang that surrounds and protects the dictator and all of those state enterprises that collect dollars and pay Cubans in worthless pesos.
The Obama administration moved too fast and never demanded concessions from a cash starved dictator about to lose his energy subsidy from Venezuela. We had all of the cards and could have done more for the Cuban people. Instead, the Obama team pleased the left wing college professors in U.S. universities and threw the Cuban people under the bus.
Prosperity coming to Cuba? It won’t happen until there is a regime change.
P.S. You can listen to my show (Canto Talk) and follow me on Twitter.