Thursday's show: Elections in Mexico, the travesty of "change" in Cuba & other stories

Thursday's video: An update on the Mexico's presidential election

Are these the people who say that we are angry? 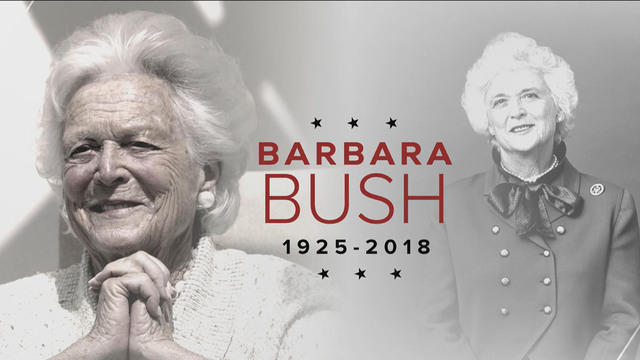 Most people have spoken with glowing words about Barbara Bush since her death in Houston. Why not? She was a nice lady, a historic woman who was married to a president and mother of another.
Nevertheless, there are people out there who have to use this death as an opportunity to get publicity and take a shot at the Bush family.
Enter Randa Jarrar, an English professor at Fresno State. She wrote this about Barbara Bush:

“Barbara Bush was a generous and smart and amazing racist who, along with her husband, raised a war criminal,” Jarrar wrote on Twitter. “F— outta here with your nice words.”

Memo to the professor:  a real war criminal would not tolerate a remark like this about his mother. At the very least, he would deport you and never allow a public university to have someone like you on the payroll. The professor “don’t know much about history” as Sam Cooke sang.
It’s tasteless but rather predictable. After all, she called Mrs. Bush a “racist” and her son a “war criminal.” Don’t these people have any other words in their vocabulary?
Someone should ask Democrats about this tweet. Am I the only one who thinks that she sounds like a House Democrat?
Another question: Where is Mark Zuckerberg when we really need him? I’ve seen a ton of very ugly comments about Mrs. Bush. Why isn’t the committee taking those down in the name of a clean community?
How about Twitter? Why aren’t comments like these deleted for being offensive?
It’s fair to disagree with President George W. Bush. However, these nasty attacks against Mrs. Bush confirm that the left is the ugly and angry side of the room.
P.S. You can listen to my show (Canto Talk) and follow me on Twitter.
Posted by Silvio Canto, Jr. Post Link ---> 10:30 PM

No change in Cuba!

Yes, no one named Castro officially in charge of Cuba. However, Mr. Diaz-Canel was Raul Castro's designated "successor". He was "elected" in a one-party election. No change in Cuba!
— Silvio Canto, Jr. (@SCantojr) April 19, 2018

A big battle underway in The Golden State

Look west and there is a big battle underway in The Golden State:   San Diego County backs Trump challenge to California 'sanctuary' law!

San Diego is California’s second-biggest by population.    It is the latest local government to declare war on the state's sanctuary policy.

As I mentioned on the radio and/or blog, it's too early to predict what will happen in 2012.

After all, who would have believed 4 years ago that Sen Obama would defeat Sen Clinton?

Didn't all the experts back then predict a Clinton vs Giuliani contest in 2008?

Nevertheless, there is some very interesting data about Pres BO vs some of the leading Republican names:

What does this information tells us?

First, Pres BO is navigating through some very rough waters.

Second, the Republicans are leading but it's all within the margin of error.

Third, Pres BO is under 50%, the nightmare scenario for any incumbent. (His job approval is 45% in this poll)

It'd be interesting to see these numbers, or pairings a year from now.

If Pres BO is under 50% then he is in very serious reelection trouble.

Where are the serious people of the world?


We know that many of them live in Israel, a nation that lives with the reality of rockets that kill her children often!


Israelis know terrorism. Unlike the Europeans, Israel can and will defend itself. Unlike many "sophisticated" Europeans who drool over "hope and change", the Israelis want straight talk.


In fact, the world owes Israel a great debt. It was Israel that blew up Saddam Hussein's nuclear plan in 1981. It may be Israel and the US who take out the Iranian nuclear facilities today!


Who does Israel want for US president? They don't want Elvis! They want McCain.


Is anybody shocked? Israel lives in the real world. They know that the US needs a president not some current version of Elvis!


The US Jewish vote is critical in states like Florida. Furthermore, Jewish Americans turn out to vote!


I guess that it's nice to know that there are serious people in the world after all. They don't live in Paris. They live in Israel!

February 2007: How is this impacting young girls?

Britney's public meltdown may be a blessing in disguise. It may take something like this incident to wake parents, and our society, that our kids need better role models.

Frankly, little girls need to be little girls. They need to stay simple and cute for a long time. They will have plenty of time to grow up and be women.
See Sexualizing Girls By Mona Charen:


"The American Psychological Association has discovered that too early sexualization of children, particularly girls, is damaging. How about that?"

Finally, check out Dying to be divas By Kathleen Parker:

"Between hourly updates on the decomposing body of Anna Nicole Smith and the balding of Britney Spears, we can confidently declare that the Jerry Springerization of America is complete. The travails of these two tragic characters would be of little interest in a normal world, but ``celebrity'' is the new normal. Like it or not, we're all in this together."

Pompeo: Are the Democrats serious at all?

Mike Pompeo will be our next Secretary of State.   Nevertheless, Senate Democrats are obsessed with gay marriage to pander to the party's left wing.

Catch this exchange between Senator Booker and Mr. Pompeo:


"When I was a politician, I had a very clear view on whether it was appropriate for two same-sex persons to marry," Pompeo responded. "I stand by that."
"So do you not believe it is appropriate for two gay people to marry?" Booker asked.
"Senator, I continue to hold that view," Pompeo replied.
“You’re going to be representing this country and their values abroad in nations where gays individuals are under untold persecution, untold violence,” Booker continued. "Your views do matter."

The Democrats are not a serious party.

February 2007: "The Oscars" or too much of the same thing

What's wrong with the Oscars? Let me try this:

1) It is too long. Sorry 4 hours of meaningless awards is just too long. Cut the TV portion to 2 hours and it will be more relevant. They should run the first 2-3 hours on some cable outlet so that the more passionate fans can watch every award and dress.

2) Hollywood has become too political. You can not put liberal after liberal on your TV screen without tuning out large segments of conservatives.

3) Most Americans do not like to hear sermons about global warming from movie stars who fly around in private jets and get around in huge SUVs.

Finally, if Gore runs for president, he will carry Hollywood but not Tennessee!