Guest:   Marcos Nelson Suarez, founder of "El Hispano" in Dallas.......We will review the Mexican presidential election and the rise of Lopez-Obrador.......and others stories..........

Friday's video: Another Friday, another strong report from the US economy

Friday's video:   Another Friday, another strong report from the US economy

Lupe, Beto, and the blue wave

As we posted last week, Texas Democrats had their lowest runoff turnout since 1920.  It was shocking, and most Democrats are still trying to put a happy face on it, connecting that turnout figure with the blue wave.
Today, we got an early indication of the “Beto vs. Ted” contest:

In the banner statewide race in the state, the new survey showed Cruz had an 11-point lead over O’Rourke.  Fifty percent of Texans backed Cruz, while 39 percent supported O’Rourke in the coming U.S. Senate race in the fall.

Beto’s 39% is just a bit better than Lupe Valdez, the candidate for governor.  She is losing to Governor Abbott 53-34%!
Democrats tell me it’s early and that Beto and Lupe are still unknown.  I buy the “it’s early” part but not the “unknown” thesis.
First, Lupe Valdez is very well known.  She was Dallas County sheriff and a huge critic of Governor Abbott and the S.B. 4 law, the law shutting down sanctuary cities.
Miss Valdez also has a bad reputation for her knowledge of issues.  This is why she did not get the endorsements of the Dallas Morning News, the Houston Chronicle, and a major LGBT newspaper.  They all endorsed Andrew White, in large part because Lupe Valdez was so bad at discussing issues.
So don’t tell me Lupe Valdez is unknown.  My guess is that her numbers will drop farther once more people get to know her.  With all due respect, Lupe Valdez couldn’t even get Democrats to turn out for her.
Second, Beto is well known for his liberal positions, from his attacks on the NRA to his support of President Obama.
Polls are polls, and elections are decided in November, not the last week of May.  Nevertheless, I see two landslides ahead in Texas.
PS: You can listen to my show (Canto Talk) and follow me on Twitter.

Have you seen any Democrat women marching calling on Newsom or Villaraigosa to resign? 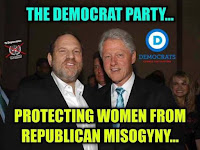 Where are the marching ladies?   I mean the ones who marched against Trump and what he said about women?    We need for the ladies to march immediately:


"Gavin Newsom had an inappropriate affair with his employee. Antonio Villaraigosa cheated on his wife with a reporter assigned to cover him.
Yet the #MeToo movement, which has urged women to speak up about sexual misconduct allegations, has remained visibly silent about the sexual conduct of two prominent Democrats running for governor in California.
Some are calling it outright hypocrisy. Critics say the two abused their power and took advantage of vulnerable women – not unlike the allegations taking down powerful men all across the country."

Can you say double standard?