Delaware is beautiful this time of year...but... 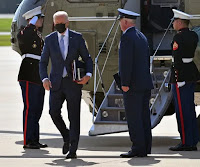 The president and first lady are back in Delaware and singing along with Perry Como:

According to news reports:

President Biden is once again scheduled to head home to Delaware Saturday, as thousands of Americans and Afghan allies remain stranded in Afghanistan following the Taliban's takeover last weekend.

The White House announced that Biden would leave for Wilmington around midday following a meeting with his national security team to get updated on the situation. Vice President Kamala Harris, who was traveling to Southeast Asia, is expected to attend virtually.

As of late Friday evening, Biden had no public events scheduled for Saturday or Sunday.

Normally, we would be very happy to see a couple enjoy their retirement in a place like Delaware.

So what in the heck is going on?  Why is this president always away from the White House?  No one would be complaining if the economy were great or the world were peaceful or the border situation were under control.

I don't know for sure, but this may have been part of the deal to get Joe out of retirement.  Maybe the phone call went something like this:

Mr. Vice President, we need you to run one more race.

Why?  Call Beto, Sanders, Warren, the guy from South Bend, Indiana whatever his name is...

Mr. Vice President, we need you.  It's you or another Trump term for sure.

OK.  Here is the deal.  If I win, I work a couple of hours a day and fly to Delaware every weekend.

Mr. Vice President, you got a deal.  We'll surround you with people who'll run the country, write your speeches, and make you so popular unlike Trump.

OK.  It's a deal, but don't complain if things don't work out.

Well, maybe it didn't happen quite that way.  Maybe he really wanted to be president and get back in the kitchen at his age.

Honestly, I don't think so.  Life has thrown the Delaware plan a major curve ball, from the price of gasoline to the border and now Afghanistan.

Wonder if anyone explained this to V.P. Harris?  She'll be owning all of this a lot sooner than she thinks.