The Afghanistan story will not go away and President Biden's polls

Tuesday's video: Afghanistan is not going away

Tuesday's video:
Afghanistan is not going away
Click to watch:
P.S.  You can listen to my show (Canto Talk).  If you like our posts, click send, and drop a dime here.
Posted by Silvio Canto, Jr. Post Link ---> 10:30 AM

'DNC, We Have a Problem' 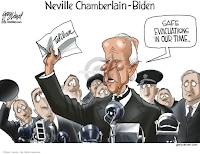 Readers may remember the famous line from Apollo 13:  "Houston, We Have a Problem."  Maybe you remember the line in 1970 or from the movie in 1995.  Either way it's become a line for the ages.

My guess is that many Democrats are calling the DNC today and saying something similar about the Biden presidency.  Unlike Astronaut Jim Lovell, the Democrats are not confident that the Biden ship is coming home safely.

According to Salena Zito, there is plenty of buyer's remorse out there:

From the uneven overall economy to soaring inflation to the humiliating debacle in Afghanistan, and from Biden's insistence to spend our money like a drunken sailor to the crisis at the Mexican border that he has blatantly ignored and to how he has politicized the pandemic: None of this is normal, none of this promotes stability, none of this is what an exhausted electorate bargained for.

The new ABC News poll showed Biden’s approval dropped significantly this week among independent voters, or as Kevin Madden, a public affairs professional and former Mitt Romney senior adviser, calls them, “the pragmatic middle” who were invested in Biden’s “promise of a return to normalcy.”

In response, Biden refuses to take questions on Afghanistan, an optic many believe is not what pragmatics signed up for. Nor did they sign up for trying to change the Supreme Court and wild spending. Exit poll data shows Biden won because voters were looking for a candidate with good judgment and for someone who could unite the country.

Not only has Biden misread this message, but he is squandering this goodwill that was granted to him in an effort to achieve a kinder, more normal presidency. Instead, normalcy and empathy have been a pseudo-creation by the people around Biden and himself and not a characteristic of the president himself.

The normal that suddenly went abnormal might be the title of the book about this presidency.

My biggest fear on the day that Mr. President Biden became president is that he would do a Clinton on us and go pragmatic.  He would focus on the pandemic and try to get back to the Trump economy as soon as possible.  He could then take credit for the recovery and most of the media would go along with it.

Instead,  he became Bernie Sanders and misunderstood totally why he was elected.  It was not because the country wanted Sanders but rather a calm Trump who didn't get into fights with people like Don Lemon whom nobody watches on TV anyway.

Normal we don't have.  Steadiness, not much.  Good policy positions, none.  The anti-Trump presidency is not working out as planned.

We say happy birthday to Joe Rudi who was born on this day in 1946.

The A's had great players, from Reggie Jackson to Catfish Hunter to Rollie Fingers.    All 3 are in the Hall of Fame.

They also had the quiet but extremely reliable Joe Rudi in left field.

And he made a great catch in game 7 of the 1972 World Series to win the first title!