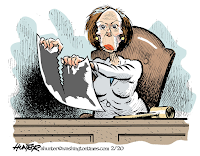 We learned that Speaker Pelosi will start her 25th Amendment plan to remove President Trump from office.

Frankly, I don't get it,  since every poll claims that Americans will remove him in less than a month.   Why get in the way of what will be a historic landslide?  Why spoil election night?

So what's Speaker Pelosi really up to?   The point of the 25th Amendment is to remove a president because of a disability, i.e. a stroke, or something very serious that prevents him from doing his job, specially commander in chief.

President Trump does not have a disability. Vice President Pence would not even entertain a claim that the president is incapacitated, nor should he. Neither would a single member of the cabinet.

And, in the unlikely event Pelosi could coerce a majority of the Democrat-controlled House to support such a cockamamie idea, the GOP-controlled Senate would not consider it, so there is not the slightest chance passing a bill creating a committee to assess the president’s condition — a bill that the president would never sign in any event.

Other than that, it’s a great idea. Especially if the speaker is trying to establish that she’s the one who has gone off the deep end.

Also, she may setting the table to remove President Biden next year.

I don't know for sure but Speaker Pelosi is an embarrassment.