Another long Supreme Court hearings but Judge Barrett holds her ground.........Court packing and more corruption of language.....The Democrats put themselves in this mess when then Majority Leader Reid changed the rules to confirm judges.........and other stories.....click to listen:
Posted by Silvio Canto, Jr. Post Link ---> 8:30 PM 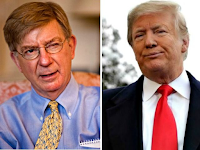 How much does George Will hate President Trump?   Quite a bit.  In fact, he hates him so much that he'd rather have Joe Biden inaugurated next January.

In his latest column,  Will mocks President Trump's supporters by asking if they are tired of winning.  He spends much of the column talking about our voting problems but does not put it in context, such as having an election in a middle of a pandemic.

What disturbs me about Mr. Will is  that he fails to see what President Trump has accomplished.

What about putting two, and now three, justices on the Supreme Court?  Three hundred judges in the federal courts?   Is that bad, Mr. Will?  Frankly, I'm not tired of that winning.   Let's keep winning.

On domestic policy, we had a super strong economy back in March.  How many times did we hear Will on TV call for tax cuts and the end of regulations?   I spent much of the 1980s hearing Will say that with the late David Brinkley on Sunday morning.

What about President Trump's pro-life policies?  Or the elimination of ISIS?  Or his more levelheaded approach to fighting wars?  Or asking NATO allies to pay up?

It seems like we've done a lot of winning under President Trump.

So Will wants to risk all of that because he does not like President Trump's personality or demeanor.   It's crazy, and that's all I can say.

Memo to George Will:   Please write another baseball book!