When I woke up this morning, you were on my mind 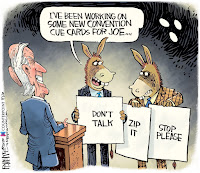 "One hit wonders" the We Five had a popular song on the radio in the 1960s called "You Were on My Mind":

"When I woke up this morning

Well, a lot of us woke this morning with President Joe Biden on our minds.

The White House explained everything by saying that President Biden had the late congresswoman Jackie Walorski on his mind.  Fair enough.  I have my late mother in my mind very often but I don't call my sister asking if mom can come to the phone.

It's time to have a serious chat about President Biden because he is only going to get worse.  It's a delicate topic because he is the President and many of us did not vote for him.  We will be accused of partisanship, insurrection, coup, stealing the election, and whatever else you can think of.

At the same time, we have a problem, as the Washington Examiner points out:

Anyone can make a mistake.

But most people can admit they made a mistake, especially when it is so public and so obvious that there’s no chance of papering it over.

But not Biden -- and not his staff.

Biden’s White House could have admitted that their boss goofed -- “He had a momentary lapse of memory,” they could have said. They could have also thrown in the line suggested by the Washington Examiner’s Tim Carney: “He is embarrassed and has reached out to the family.” This would have been adequate.

No, this is not normal.  In fact, it is very scary because we are talking about the President of the U.S.  Furthermore, and very sad, all of us remember an aging parent or grandparent who get getting worse not better.  It was painful to watch my grandmother go through this and I fear that Mr. Biden is going in that direction.

Where do we go from here? The 25th?  Well, that's the problem because a certain VP Harris would be next in line. Rely on his cabinet? How much do we trust a cabinet made up of people who checked an "identity politics" box rather than having experience in their field?

We are in deep trouble, and everybody knows it, especially our enemies.