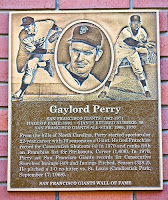 The legendary Gaylord Perry died this week at age 84.  Along with his brother Jim, also a successful major league pitcher, he was raised in North Carolina back when boys used to work at the farm rather than play video games.  This is from The Society of Baseball Research:

Gaylord Jackson Perry was born September 15, 1938, to tenant farmers Evan and Ruby. Gaylord’s older brother James also had a long major league pitching career, and younger sister Carolyn completed the family. Evan Perry was a great athlete who played both baseball and football, and reportedly turned down a minor league contract because his family could not afford to have him leave their farm. Evan and Ruby had a 25-acre parcel of land, where they grew tobacco, corn and peanuts for money (sharing half with the landowners), and raised animals and additional vegetables to feed their own family.

Gaylord and Jim began plowing the fields with a mule at the age of seven, and Gaylord’s earliest childhood memories were of working on the farm and wanting to be a cowboy. The Perry boys were luckier than most--their father loved baseball and gave them as much free time as practical so that they could pursue the game. Jim and Gaylord both began playing ball with their father during their lunch break, and later all three played on the same local semi-pro team.

From 1962 to 1983, he pitched in the majors and did some pretty amazing things:  314 wins, 2-time Cy Young Award winner, a no-hitter, 4-time 20 games winner, an amazing 3.11 ERA over 5,350 innings and 3,534 strikeouts.  Like Nolan Ryan, Gaylord Perry did not play for good teams so his overall record has to be understood in that context.  His only post-season appearance was in 1971 with the Giants.

However, his greatest accomplishment was completing games, or a rarity these days of counting pitches and computer statistics.  He completed 303 games of the 690 that he started.  Talk about you won't see that again.  Of course, all of these numbers put him in The Hall of Fame in 1991.

I don't know whether he threw a lot of spitballs but the batters said yes. Back in the 1972 All Star Game, Henry Aaron hit a HR off Perryand said: “The pitch I hit off him was a spitter. It wasn’t one of his best spitters, but it was a spitter..”

I saw him pitch a few times and he was constantly touching his cap and jersey driving batters and the other dugout crazy like what we remember from the 1973 season when the Yankees could not take it anymore:

In June of 1973, literally taking matters into his own hands, Yankee manager Ralph Houk charged the mound, pulled the cap from Perry’s head, tossed it on the ground and kicked it.

After the game, in which third base coach Dick Howser was ejected during another greaseball allegation, Yankee outfielder Bobby Murcer lamented, “If the league president or commissioner had any guts, they’d ban the pitch.” Murcer was fined for his comments, but did not back off.

On June 29 ABC-TV filmed a Perry outing, and the next day, on Wild World of Sports, Bobby Bragan provided expert commentary to Howard Cosell while reviewing the film.

Bragan, an old adversary of Perry’s from the National League, claimed he saw several greaseballs, further showing the world that Perry was getting the stuff from his armpit. Perry was livid, claiming that Bragan had privately told him he had seen nothing suspicious.

After another game, the league chemically analyzed a batch of balls that Perry had used and pronounced him clean.

In the end, he got the "W" and another complete game. Call it mind games -- it worked every time and Gaylord laughed all the way to the 27th out.

RIP Gaylord Perry.  Maybe Gaylord can tell Saint Peter that all of this stuff about spitballs was fake news.  And don't be surprised if Saint Peter gives him a funny look.