Religious freedom in the US today

Religious freedom in the US today 12/30 by Silvio Canto Jr | News Podcasts: 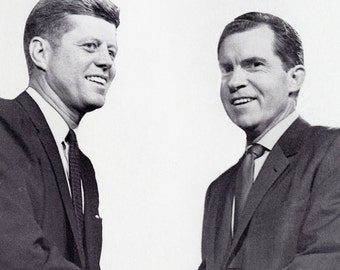 
Everything changed when JFK was assassinated in Dallas. He became a legend and myth.


Today, Democratss remember whatever they want to remember about Pres. Kennedy.  What most of them forget is that JFK would not fit in today's party.  In fact, it's very likely that JFK would have joined Joe Lieberman and walk out on the party's irresponsible national security agenda.


Bill Katz was a college student and a party volunteer on Election Night 1960.  Today, he runs Urgent Agenda, one of my favorite websites.


This is an audio history. Listen here! You will enjoy it!

A little ‘gas anger’ in Mexico

(My new American Thinker post)
During my four years working in Mexico for a U.S. bank, I recall two interesting reactions when Mexicans visited their friends or family in the U.S.
The first one is that they were overwhelmed by our interstate highway system. I remember a Mexican friend asking: “Who built the roads”? I explained the history of the interstates and he replied by saying something along the line that it’s nice to see your taxes doing something good.
The second was that they were impressed by the number of gasoline stations and how people actually shopped for price. The reason for this is that in Mexico there is no shopping for gasoline since all of the stations are owned by PEMEX, and they determine the price too.
“Cambio” or change, is coming to Mexico, as they say.
Have you spoken with anyone from Mexico over the holidays? Well, it’s all about gasoline prices south of the border these days, as we can see in this report from Bloomberg:

Mexico will raise gasoline prices by as much as 20 percent in January, stoking inflation that’s already running at the fastest pace in almost two years.
A month after the increase is implemented, prices will start to adjust on a daily basis as the government loosens its control of the gasoline market, the Finance Ministry said in an e-mailed statement Tuesday.
January’s increase in unleaded gas will be the biggest since November 1998.
The jump in prices risks pushing up inflation at a time when a slump in the peso has already fueled concern about rising consumer prices and led the central bank to raise interest rates five times this year.
It is a risk Mexico is willing to take as the government gradually lifts controls over gasoline prices to open the fuel market to private development, a move made possible by a landmark energy overhaul in 2013.

Frankly, it had to happen, although I agree that it will hit consumers very hard and drive up the cost of anything that must be transported. The new price will be about 16 pesos a liter, or about 50 pesos a gallon, i,e, about U.S. $3. It could be higher than in the U.S.!
At the same time, Mexico can no longer subsidize gasoline, especially since a lot of it is refined in the U.S.
Here is a dirty little secret that no politician talks about in Mexico: PEMEX sends oil up here and we send gasoline back to them. It is worth approximately US $15 worth of business to refiners such as Valero, Marathon Petroleum, and Citgo Petroleum. It happens because PEMEX spends too much of its resources on everything rather than drilling or refining.
Of course, the solution is to privatize PEMEX and put that sacred cow away for good. Unfortunately, “vacas sagradas” or sacred cows have lots of friends in high places, so don’t expect that to happen.
P.S. You can listen to my show (Canto Talk) and follow me on Twitter.
Tags: Gasoline prices in Mexico To share or post to your site, click on "Post Link". Please mention / link to the My View by Silvio Canto, Jr. Thanks!
Posted by Silvio Canto, Jr. Post Link ---> 7:00 AM