Friday: Obama Care politics, Cuba after Castro and another week in the Trump transition

Dr. Stein is not a serious person 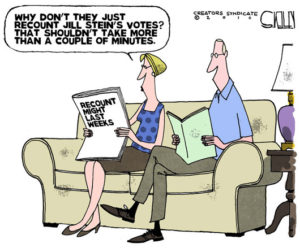 (My new American Thinker post)
Dr. Stein had a bad November, and now comes December. Maybe she is performing in a one-woman “delusional melodrama“. Better than that, maybe a truck needs to pick the wreck before it gets more embarrassing.
First, she did not do well in the elections. Did she really get the Sanders’ vote, as I believed that she would, or did she keep them home? It looks like they stayed home.
Second, she made an amazingly stupid statement about Fidel Castro’s death:

Fidel Castro was a symbol of the struggle for justice in the shadow of empire. Presente!

“Presente” for what? Can someone remind Dr. Stein that the crowds that scream “presente” in Cuba are people who have to choose between showing up at the rally or job promotions?
Are you awake, Dr. Stein?
And third, even the Milwaukee Sentinel Journal is questioning the value of the recount:

Jill Stein may actually believe that demanding a recount of presidential tallies in Wisconsin, Michigan and Pennsylvania will ensure that “democracy” is served.
More likely, she believes the Green Party will be served by her audacious PR stunt.
Either way, the Stein recounts are a colossal waste of money and energy when there is not a shred of credible evidence of fraud or error and when the final vote in these three states likely will not change very much.
Stein’s quixotic moralizing damages the credibility of the very institution she claims to protect — the sanctity of the ballot box. It could even put Wisconsin’s 10 electoral votes at risk if the recount isn’t completed by the time the Electoral College meets in December to officially confirm Trump’s election. Stein wants a hand count of ballots, and sued on Monday to try to force a reluctant state government to do that.
Hillary Clinton’s campaign should have stayed far away from this nonsense. Instead, her campaign is participating in the recount.

We will probably have to watch this Wisconsin recount go through. It won’t change a thing but will remind us that Dr. Stein is not very smart, or serious.
Once upon a time, recounts and accusations of racism were serious matters. Today, everybody is a racist, specially if you disagree with Democrats, and recounts are just a modern version of playing that hippiest of all hippie tunes, “Green Tambourine“.
Close the doors, Dr. Stein.
P.S. You can listen to my show (Canto Talk) and follow me on Twitter.