ObamaCare and those Penalties around the Corner 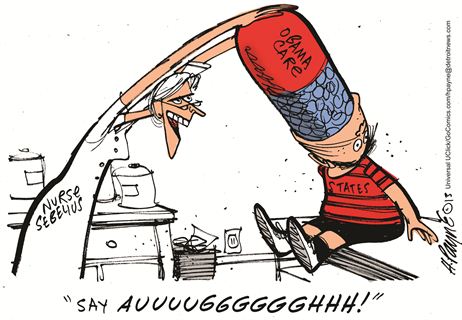 The numbers speak for themselves: the RCP average of the last 7 polls has support for ObamaCare at 39%. The spread is minus 11!

So much for we need to pass it to learn what's in it. They passed it, we learned what's in it and don't like it much.

1) The Supreme Court is once again going to issue an opinion on King v Burwell. I have no idea what the court will say but a negative ruling would hurt a lot.

2) The law is unmanageable, as we just learned that wrong tax info was sent to individuals:

"The Obama administration revealed Friday that it sent about 800,000 HealthCare.gov customers a tax form containing the wrong information, and asked them to hold off on filing their 2014 taxes.
The self-inflicted bungle follows weeks of administration officials touting a successful enrollment season -- one that saw far fewer technical glitches than the rocky launch in late 2013.
About 11.4 million people signed up this season. But errors in tax information mean that nearly 1 million people may have to wait longer to get their tax refunds this year.
California, which is running its own insurance market, just announced a similar problem affecting about 100,000 people in that state."Incompetence and mismanagement seem to follow ObamaCare.

3) The law is very costly, as more and more Americans will learn very soon:


The problem is the Obama administration did not explain "the penalties" or prepared the public for the costs. They sold the "benefits" but not the costs or hassles of this law.

My guess is that we will be "knee deep" in ObamaCare stories in a couple of months.

My second guess is that lots of Democrats are lighting candles and praying that Justice Roberts doesn't mess it up again.

Some thoughts about the immigration executive order with George Rodriguez