Wednesday's show: The gun control debate, Nixon to China 1972 and other stories

Wednesday's video: Too much politics in the gun control debate again

Once again, politics is killing the gun control debate with the attacks on the NRA etc. Let’s concentrate on school security and improving the background checks.......

How soon before we call it ‘the jobs to China moment’?

On this day in 1972, President Richard M. Nixon made history, and showed some political flexibility, by landing Air Force One in China.  It was the story of the year and one of the most interesting foreign policy decisions of the postwar period, especially because of Nixon’s political past.

Nixon seemed an unlikely candidate to thaw those chilly relations.
During the 1940s and 1950s, he had been a vocal cold warrior and had condemned the Democratic administration of Harry S. Truman for “losing” China to the communists in 1949.

President Nixon’s move paved the way for the China of today – in other words, cars instead of bicycles.  Skyscrapers instead of simple buildings.  It also contributed to the outsourcing of thousands of manufacturing jobs – i.e., “Made in China” is everywhere!
The jury is still out on just how much the U.S. got out of this arrangement.  At the same, most Americans are not old enough to remember Mao or the China that some of us remember as kids.  Back then, it seemed that all Chinese men and women wore the same outfits.  Today, they are as fashionable as anyone in the West.
Nevertheless, as Seth Mandel wrote a couple of years ago, President Nixon left us with a great expression: “any major politician’s rebuke to his ideological compatriots, no matter how superficial, is a ‘Nixon-to-China moment.'”
Some of us are old enough to remember watching the scenes on the evening news.  It’s amazing how China has changed.
Was it the right thing to do?  We are still debating that today.  I just don’t remember anyone back then saying opening up China would turn China into a manufacturing powerhouse with a huge, and expanding, navy.
PS: You can listen to my show (Canto Talk) and follow me on Twitter.
Posted by Silvio Canto, Jr. Post Link ---> 10:30 PM

My friends tell me that no one listens to former President Fox in Mexico.......so what do you do when you are irrelevant at home? You become an anti-Trump spokesman.
— Silvio Canto, Jr. (@SCantojr) February 20, 2018 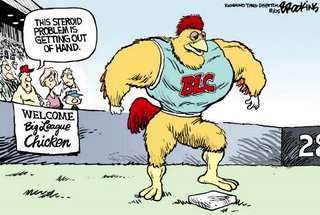 Back in 2006, baseball had a real image problem.    It was inevitable that someone would come up with a pretty good cartoon.
Posted by Silvio Canto, Jr. Post Link ---> 12:30 AM