Tuesday's video: North Korea and the US Embassy in Cuba on the front pages

Another bad night for Hollywood 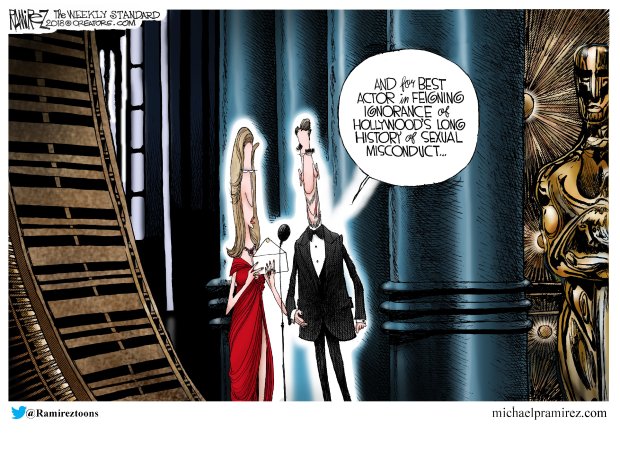 It’s amazing that an industry focused on our imagination is so unimaginative when it comes to talking about itself.  What we saw Sunday night was Hollywood being Hollywood, or just another example that they are in the tank for the left and not much more.  At one time, they made movies.  Today, they are nothing but a brigade to promote the Democrats’ talking points.
I agree with Sara Stewart:

Almost anything would have been better: The 90th Annual Academy Awards was the most tepid, predictable one in recent memory, devoid of anything resembling a spontaneous or dramatic moment until it was nearly time to wrap it all up.
Thanks, at least, for a fiendishly giggling Best Actress winner Frances McDormand, who in her speech urged all the female nominees in every category to stand up and represent the future of the industry.

Jimmy Kimmel had to punch President Trump and V.P. Pence over this or that.  He had to talk about gun control from a building protected by guards with real guns.
My guess is that the first ratings report will confirm that this show didn’t play well with the people who live between the coasts.  As Salena Zito wrote about the CEOs of the companies who walked away from NRA members, these executives don’t know their customers any more than Hollywood knows the people who are refusing to buy movie tickets.
Hollywood is gone to the left, and the rest of us are busy with our lives.  It’s only a matter of time before advertisers figure it out and stop funding this political commercial.
PS: You can listen to my show (Canto Talk) and follow me on Twitter.
Posted by Silvio Canto, Jr. Post Link ---> 10:30 PM

The Hispanic vote and President Trump

We've been looking at some Trump polls.

The bottom line is that those numbers will easily reelect President Trump.