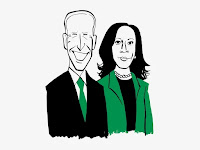 What else could go wrong in the first year of Biden?   Could VP Kamala Harris soon a get a visit from Speaker Nancy Pelosi and Majority Leader Chuck Schumer that sort of goes like this:

Madame Vice President, you need to step aside because you're killing us.   How does an ambassadorship to India or Jamaica sound to you?   You could go back to your roots and learn more about your parents.  The beaches in Jamaica are lovely and the food in India has such variety.  Think about it, Madame Vice President.  You are no longer the one.

Yes, I'm being a bit silly but there is nothing good about the matter of VP Harris.   As my late mother would have said in her Cuban accent:   "Esto esta muy mal."   Yes, it translates to this is very bad.

VP Harris brought her act to Paris this week.  Normally, Paris is friendly territory for a Democrat.   Unfortunately for the White House, the VP couldn't perform there either.  The lady has turned into a major liability,

This is from Joe Concha:

It's been 153 days since her last sit-down interview with a major broadcast news entity, in the form of NBC's Lester Holt. You may recall that was the beginning of the end of the administration's confidence in her abilities to handle even the most basic of questions.

"Do you have any plans to visit the border?" Holt asked.

"You haven't been to the border," Holt correctly noted.

"And I haven't been to Europe," Harris snapped before laughing. “And, I mean, I don't understand the point that you're making."

Well, she went to Europe and probably won't be answering any questions about that.

At this point, every Democrat is praying that President Biden makes it to 2025.  You will probably see less and less of the President and Vice President from this point forward.  You may well see the Vice President's husband representing the U.S. in funerals and other traditional visits.  He probably has more tact and sense than his wife, as we just saw in that awkward speech in Paris.

Will Harris get the Spiro treatment? I don't know but then VP Agnew became a liability for the Nixon presidency.  Spiro had to go. Maybe Kamala will have to go too.


We say happy birthday to Neil Young, one of our favorite rock performers.   Neil was born in Toronto on this day in 1945.   He recorded with Buffalo Springfield, Crosby Stills Nash & Young and on his own.

"Heart of gold" is one of my real favorites....
P.S.  You can listen to my show (Canto Talk).  If you like our posts, click send drop a dime here.