We expected this 'rain delay' here in Texas 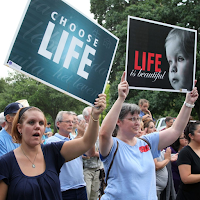 As expected, a federal judge came to the rescue of the Biden administration and stopped the Texas heartbeat law. This is the story from The Texas Tribune:

A federal judge temporarily blocked Texas’ near-total abortion ban Wednesday as part of a lawsuit the Biden administration launched against the state over its new law that bars abortions as early as six weeks of pregnancy.

But it’s unclear how U.S. District Judge Robert Pitman’s order may affect access to abortions in the state — or if it will at all.

The state of Texas quickly filed a notice of appeal and will almost definitely seek an emergency stay of Pitman's order in the 5th Circuit Court of Appeals, which is known as perhaps the nation’s most conservative appellate court.

In a press release, the ACLU of Texas pointed to the uncertainty on how Wednesday's order and the state's appeal will affect procedures in the state.

Is the law dead or is this like a rain delay? We will know soon when the next court writes an opinion.

My hope is that the Supreme Court will settle this for once and for all next June. The Court will write an opinion on a Mississippi case, or Dobbs v. Jackson Women’s Health Organization. This is the 15-week case of no abortions after 15 weeks.

In my opinion, the Court will decide 5-4 or 6-3 that states can regulate abortion, as most countries do today. It will leave an open window for abortions but limit availability or something like that.

In the meantime, we will go from court to court in Texas. We pray that the Big Court comes through.

Maybe we can look forward to a future when judicial nominations are not all about abortion anymore. Wouldn’t that be a refreshing change of pace?

UPDATE: The Fifth Circuit has reversed the orderstaying the ban, so it's now reinstated. However, given that the case will inevitably appear before the Supreme Court, that ruling does not change this analysis.