Everything is a mess, but at least we have a transgender admiral 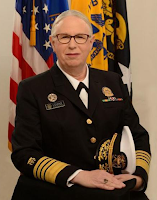 It was nine months this week that Joe Biden became president.  To say the least, it's been a mess and getting messier, from inflation to supply chain issues to a lawless border and the President dropping dramatically in polls.

Nevertheless, they can't contain their enthusiasm over at NPR.  They can't stop telling us that history was made this week:

Dr. Rachel Levine is once again making history, becoming the first openly transgender four-star officer to serve in any of the country's eight uniformed services.

During a ceremony Tuesday, Levine was sworn in as an admiral -- the highest-ranking official of the U.S. Public Health Service Commissioned Corps. Levine's appointment to the USPHS Commissioned Corps also made her the organization's first female four-star admiral.

Previously she became the first openly transgender person to be confirmed by the Senate for a federal office.

"[Becoming a four-star officer] is very meaningful to me. I am so impressed by the dedication, the commitment and the expertise of the officers and the United States Public Health Service Commission Corps. And it is truly an honor to lead them and to serve with them," Levine said in an interview with NPR.

She describes her appointment as part of the Biden administration's commitment to diversity, inclusion and equity.

We wish the admiral well.  I am delighted to read that the Biden administration is committed to diversity, inclusion, and equity.   Just remember that the next time you fill up your tank. go out to dinner, go shopping for groceries or read about the border.