The teachers unions are their own worst enemies

The teachers unions are not making a lot of friends these days.  Their insistence on keeping schools closed out of fears of COVID is damaging to children.  And they seem to be going out of their way to blow up relationships, especially with the parents who pay their taxes, i.e., teacher salaries!
It reminds me of that famous line from Napoleon: "Never interrupt your enemy when he is making a mistake".
Well, I am not going to refer to the unions as my enemy.  Nevertheless, I am not very happy with them and lots of others seem to agree with me.
David Brooks, writing in the New York Times, is right:

The first fact is that remote learning is a disaster, especially for disadvantaged students.

I recommend an article Alec MacGillis wrote for ProPublica last fall on how things were going for students in Baltimore. It paints a finely grained portrait of chaos: online classes in which almost no students show up, schedules rearranged at the last minute, Zoom links that are inaccessible. The 12-year-old boy at the center of the piece was passionate about school before the pandemic, but by last fall he was talking about school in the past tense.

Private and some public schools are already operating safely all around the country, with little evidence that attendance is spreading the virus.
That's correct and I can see it with my own eyes.  The Catholic schools and other private schools are up and running.  They are super-careful and go out of their way to protect the teachers and students.  The bottom line is that they are teaching students.
On the other hand, the teachers unions have managed to shut down in-class teaching for millions of kids, coast-to-coast.
Why are the teachers unions acting like this?   My guess is that they just wanted to oppose President Trump.  After all, they do support the Democrats most of the time.
My second guess is that it's a monopoly and parents face two alternatives: home schooling or pay tuition. Unfortunately, a lot of working couples can not afford to have one parent stay home and serve as a home school teacher.  Also, paying tuition may not be an option for many family budgets, especially the ones paying property taxes that finance schools.
So where do we go?  We are moving in the direction of many parents taking control of their kids' education.  I like that option.  I don't think that the teachers unions will when state legislatures start passing laws that support alternatives to public schools.
Memo to parents:  Be patient because the public school monopoly is destroying itself.
P.S.  You can listen to my show (Canto Talk).
Posted by Silvio Canto, Jr. Post Link ---> 5:23 AM 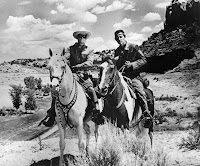 Like some of you, I grew up watching “The Lone Ranger” on TV. In my case, it was the Spanish dubbed version of the show before we came to the U.S.

Up here, his friend was Tonto. In Spanish, it was “Toro.” It did not take me long to figure that one out.

As I learned, the show started on the radio on this day in 1933, although I don’t know if there was a Spanish version for the radio. However, I do recall my father talking about “comics” in Spanish.. In 2010, I heard some of those old radio shows and they were great.

Eventually, radio became TV and “The Lone Ranger” was seen by millions of kids like me.

P.S. You can listen to my show (Canto Talk).

Former VP Dick Cheney was born in Nebraska on this day in 1941.   He later moved to Wyoming where he went to college and entered politics.
We came to know Dick Cheney when he became White House Chief of Staff under President Ford, 1975-77.  Later, Mr. Cheney was elected to the House in 1978 and reelected five times.
In 1989, President Bush nominated him for Secretary of Defense and oversaw the very successful 1991 Operation Desert Storm.
In 2000, he was elected VP under the second President Bush.
VP Cheney was a critical national security player in the Bush administration.    In all, Mr. Cheney served four US presidents, from Nixon to Ford to Bush to Bush.
P.S.  You can listen to my show (Canto Talk).  Here are a couple of good Cheney books: