Bush lots of class Obama not so much 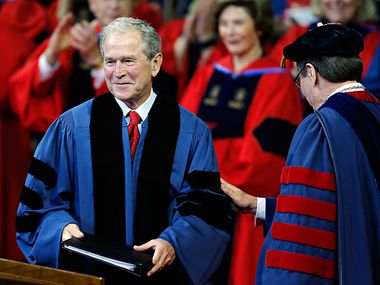 Over the weekend, former President Obama spoke at a virtual commencement graduation.  Unfortunately, he used the opportunity to attack our “leadership on coronavirus response.”   It was totally inappropriate to bring your politics, perhaps bitterness, into a commencement speech.
It reminded me of former President George W Bush.  He spoke at our #2 son’s graduation ceremony from SMU Law School in 2015.
It was a great morning for our family and an opportunity to hear from President Bush.  It was his first commencement since leaving office and second at SMU.  He spoke at SMU as governor in 1999.
He got a tremendous reception from students and family.  It had the feeling of a campaign rally as the crowd started applauding when he and Mrs. Bush walked up to the platform.
The speech had a lot of the Bush that we’ve grown accustomed to.  He joked about Laura, an SMU graduate, and assured the audience that he’d be brief.  He spoke about faith plus love of country and family.
My favorite part is when he spoke about PM Winston Churchill:

Like Churchill, I now paint. (Laughter.) Unlike Churchill, the painting isn’t worth much without the signature. (Laughter.)
In 1941, he gave a speech to the students of his old school during Britain’s most trying times in World War II.
It wasn’t too long, and it is well-remembered. Prime Minister Churchill urged, “Never give in… in nothing, great or small, large or petty. Never give in except to convictions of honor and good sense.”
I hope you’ll remember this advice.
But there’s a lesser-known passage from that speech that I also want to share with you:
“These are not dark days. These are great days. The greatest our country has ever lived; and we must all thank God that we have been allowed, each of us according to our stations, to play a part in making these days memorable in the history of our race.”
When Churchill uttered these words, many had lost hope in Great Britain’s chance for survival against the Nazis. Many doubted the future of freedom.  Today, some doubt America’s future, and they say our best days are behind us. I say, given our strengths — one of which is a bright new generation like you — these are not dark days. These are great days.

He also reminded the students that they live in the U.S., the greatest country on earth.
It was class act all the way and the audience loved it.  What a contrast with the bitter and self-absorbed man who succeeded him.
P.S.  You can listen to my show (Canto Talk).  If you like our posts, click send drop a dime here.
Posted by Silvio Canto, Jr. Post Link ---> 6:17 AM

We say happy birthday to Pete Townshend, who was born in London on this day in 1945.

According to his biography, Pete got into rock when "Rock around the clock" hit the radio in 1956.   Eventually, he joined The Who, one of the super bands of rock history.

My favorites are "Happy Jack" and "Pinball wizard". 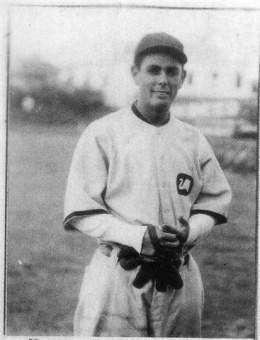 We remember Merito Acosta  (Baldomero Pedro Acosta Fernández) who was born in Bauta, Artemisa, Cuba, on this day in 1896.


On June 15, 1913, Acosta made his major league debut with Washington.    He was only 17 and one of a handful of teenagers who’ve played in the major leagues.

Acosta played 5 more years hitting .255 over 180 games.   He played all 3 outfield positions.
After baseball, Acosta worked to put a minor league team in Havana under The Florida International League.
Acosta died in Miami in 1963.
PS: You can listen to my show (Canto Talk) and follow me on Twitter.
Posted by Silvio Canto, Jr. Post Link ---> 12:03 AM