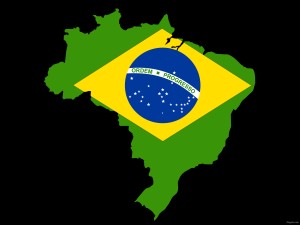 (My new American Thinker post)
Over the last 18 months, the Brazilian economy, one of the Top 10 GDPs in the world, has been in a “funk”, i.e. minus 3.8% growth in 2015 and about minus 3% is expected in 2016.
Can you remember the last time that the U.S. economy had back to back declines like that? We would call it a very bad recession.
Add to that the political crisis and Brazilians are not a happy bunch.
This week, President Michel Temer, who followed the impeached President Dilma Rousseff, announced some tough austerity measures:

Mr. Temer insisted on Tuesday that the spending cap was needed to lift Brazil out of the country’s most severe economic crisis in decades.
He called the Senate vote an “extraordinary victory,” though various senators from his coalition refrained from voting, diminishing support for the measure after a first round of voting.
The positioning against Mr. Temer comes as he grapples with claims that he solicited millions of dollars in illegal campaign donations from Odebrecht, a Brazilian construction giant.
In addition, Mr. Temer is embroiled in a scandal over claims that he pressured a cabinet minister to assist an ally in a property deal.

President Temer is going in the right direction. His center-right instincts have my support and probably those of most business people. However, I am not sure that he will be around when the country reaches the intended destination of a more vibrant economy.
At times like these, or when a president calls on his countrymen to make sacrifices for the common good, it is very difficult to have a leader under an ethical cloud. Fair or unfair, most Brazilians see him as another politician who needs to go through the “car wash” or the Brazilian expression similar to Mr. Trump’s “drain the swamp”.
Brazilians just don’t trust anymore, an understandable position given everything that has come out about the people running their country.     The good news is that stories of corruption and graft fill the pages everyday. In other words, a lot of cars are getting washed.
The bad news is that the country is running out of leaders who are not stained by corruption or the crony capitalism made famous here.
An interesting sign is that an evangelical bishop just got elected mayor of Rio! He beat a socialist by 20 points in one of Latin America’s largest cities.
So now it’s time for President Temer’s austerity. There are protests in the streets.
Let’s see what happens in 2017. However, don’t be shocked if we are talking about a new president by next Christmas.
P.S. You can listen to my show (Canto Talk) and follow me on Twitter.
Tags: Brazil 2016 and 2017  To share or post to your site, click on "Post Link". Please mention / link to the My View by Silvio Canto, Jr. Thanks!
Posted by Silvio Canto, Jr. Post Link ---> 7:00 AM

Christmas books and poetry of the season with Frank Burke

Christmas books and poetry of the season with Frank Burke 12/23 by Silvio Canto Jr | Books Podcasts: