Friday's video: Trump and troops on the border

Remember when you weren’t supposed to make fun of an immigrant’s accent? 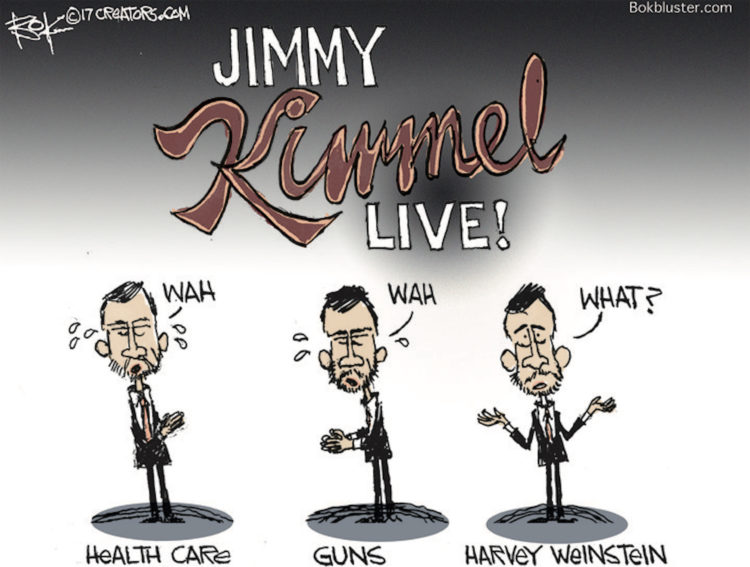 Welcome to the brave new world, or whatever else you want to call it, that the left has built. Let me give you some examples:
1) Down in Texas, a white guy named Robert O’Rourke wants you to call him “Beto” because he needs to connect with South Texas voters;
2) Up in Massachusetts, a white woman wants you to believe that she has Cherokee, or whatever, blood, because she needed to promote her minority status; and,
3) On nighttime TV, a comedian named Jimmy Kimmel can not speak two sentences without taking a shot at President Trump, and now even his wife.
For some time, Jimmy Kimmel’s show is all about attacking President Trump. In my mind, it’s okay for a comedian to attack the President of the U.S. I don’t have to watch it if I don’t like it.  So I don’t watch Kimmel.
It’s another story to take a cheap shot at the First Lady.
This is from Jimmy Kimmel’s show:

On Monday, the White House held its 140th annual Easter Egg Roll. The event, hosted by Melania Trump, featured children adorably pushing eggs along the White House lawn.
In a bizarre response, late night talk show host Jimmy Kimmel launched an attack on Melania Trump over the event.
First he derided Melania as being uninvolved in the set-up of the event. “Not a chance she did one thing to help set that up. There’s no — she didn’t dye eggs, she didn’t fill baskets.”
Did Michelle Obama dye eggs or fill baskets? Where was Kimmel to question her efforts during the eight years of the Obama administration?
Next, Kimmel mocked Melania Trump’s accent. This type of anti-immigrant attack is only OK for leftists to make on people like Melania.

Really, Kimmel? Is that the best that your comedy writers can do?
We are watching what Trump Derangement Syndrome has done to people like Jimmy Kimmel.
Once upon a time, we stayed up to watch the Johnny Carson monologue. It was funny because we didn’t know what politician was going to get it tonight.  We also knew that Carson would give it to both sides!
Last, but not least, Kimmel and the liberals are violating their own principles. It wasn’t long ago that they’d crucify anyone who made fun of an immigrant’s accent. Can you imagine what a liberal like Kimmel would have said if one of us had mocked Secretary Madeleine Albright’s accent?
Where are the people defending the immigrant mocked on TV? Well, it does not count because she is married to Trump!
P.S. You can listen to my show (Canto Talk) and follow me on Twitter.

Another casualty of Trump Derangement Syndrome

Another casualty of Trump Derangement Syndrome: "Sen. Kamala Harris raises eyebrows on 'Ellen' with Trump joke" There is nothing funny about this unless you are on the "Ellen" show and need to show the left wing base that you hate Trump as much as they do....Very sad!
— Silvio Canto, Jr. (@SCantojr) April 6, 2018

Here is the headline:  "California faces a US$ 1 trillion unfunded pension liability"

So how do the Golden State politicians tackle this time bomb?   They spend all of their time distracting the voters by picking fights with President Trump!

Wonder why so many are moving out?

Remember the one about "the rich are not paying their fair share'?

Wonder when Democrat women will march apologizing for their silence about Senator Ted Kennedy?

Wonder when Democrat women will march apologizing for their silence about Senator Ted Kennedy? I have not seen "Chappaquiddick" yet but the reviews are very good. Again, where are the women who defended him? They need to answer that question before they go out marching again.
— Silvio Canto, Jr. (@SCantojr) April 6, 2018

A post from January 2007: More on Chavez and Venezuela

Do you have any friends in Venezuela? My family does and there is a lot of concern about Hugo Chavez' latest act. See Collapsing Venezuela By Richard W. Rahn:

"If Venezuelan President Hugo Chavez deliberately intended to sabotage his nation's economy, he would be hard-pressed to do anything different from what he is now doing to his country."

It is frightening to read what Hugo Chavez is doing to buy influence in other countries:

"Where has all the money gone? It has gone to buy foreign political influence and loyalties in places like Cuba, Bolivia, Nicaragua and even the United States (notably to subsidize some New England fuel oil consumers through a company controlled by members of the Kennedy family). The money has gone to buy weapons from Russia, Spain and elsewhere, endearing those countries to Mr. Chavez. The money has gone to local cronies for inflated infrastructure and economic development projects and to buy the loyalty of government officials and supporters, including judges."

Keep an eye on Chavez. He may not be a direct military threat to the US. However, he may be to allies like Pres. Uribe in Colombia and others.

A post from January 2007: Can we get serious about Social Security reform?


In 2005, Pres. Bush put a Social Security idea on the table. It wasn't perfect. What is? Yet, it forced the nation to think about the issue.

The Democrats responded with the usual "demagoguery" that Republicans want to hurt old folks.

The bottom line is that nothing happened. We are now two years closer to the point when baby boomers retire and start collecting their checks.

Entitlement reform, and the war on terror, must be the issues of 2008.


The American people are ahead of the politicians on this one. They understand that the system is broken. We need leadership on entitlement reform.