Democrats and the border plus Senator Scott & other stories 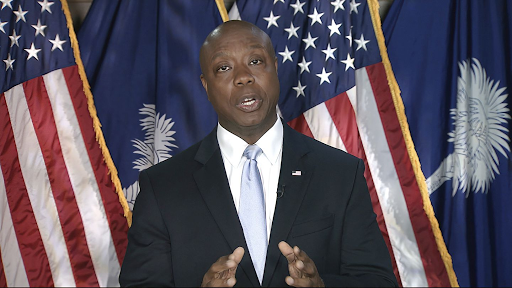 Biden on The Twilight Zone

President Biden's speech was long and boring, and that's the best I can say about it.  It got to the point that I was counting the number of times that Speaker Pelosi got up to applaud or how often VP Harris nodded her approval of whatever point he was making.   By the way, was that Senator Joe Manchin in a corner hiding so that the people of West Virginia did not know he was there?

So who came up with "mask theater" or the idea of speaking to vaccinated members of Congress wearing masks?  On one hand, he is telling us that his administration saved the day on COVID-19.  On the other hand, he won't fill the House chambers to prove his point.

The speech bombed in style, or as the New York Post said:

The good news is that the agenda did not click, in large part because the presentation was so bad and incoherent.  It was the tired worthless clichés about helping families and throwing the IRS at the rich guys who take advantage of loopholes.

The bad news is that he did not address two major concerns.

Second, what about the border?  I did not hear any solutions or update from Harris.

So the speech bombed.  It did not sell his agenda.  It's hard to believe that any GOP senator or member of the House will support it.