Pelosi says no to court packing vote, but.... 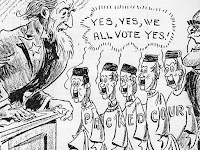 What's worst than the Democrats endorsing court packing?  The answer is a Democrat Speaker of the House that won't put it to a vote.  This is from news reports:

Speaker of the House Nancy Pelosi (D-CA) said in a press conference Thursday that while she will not rule out adding members to the Supreme Court in the future, she will not bring a proposed bill to expand the Court to the floor for a vote.

Asked whether she planned to bring the bill, reportedly being drafted by House Judiciary Committee chairman Rep. Jerry Nadler (D-NY) and others, to the floor for a vote, Pelosi answered, “No.”

Well, how is that for leadership?  Don't you love that?  So she's for packing the court but won't let the representatives vote for it

So here is the slogan for the Democrats in 2022:  Pack the court but please don't make us do it.

This is hilarious for you and me.  It won't be funny for the wokes or the squad.  They will go bananas and turn on Madame Speaker.

Why is the Speaker doing this?  My guess is that she knows that "court packing" would be an electoral disaster.  In fact, it's such a disaster that she’d rather have Don Lemon talk about it rather than the legislators vote on it.