The spring of stupid mistakes 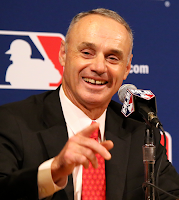 Perhaps we will look at 2021 as the year of stupid, unnecessary mistakes.  How else do you describe two big decisions of 2021?

First, the Biden administration goes full "Trump Derangement Syndrome" and cancels the Trump policies on the border.  What's wrong with that?  Well, the Trump policies were working.  The border was calm and people understood that it was fruitless to "caravan" north because they couldn't go into the U.S.  So they waited in their home country and no one was happier than President Andres Lopez-Obrador of Mexico.

Second, MLB Commissioner Rob Manfred did not have the backbone to tell the social justice warriors to go home.  He could have told them MLB is a baseball league, not anything more.  Furthermore, coming out of a pandemic year the game needs every fan that they can get rather than controversy.

Unfortunately, Manfred did not read the law or tell the activists to go away.  He looks silly now in light of MLB's efforts to do business with China and Cuba, as we see in this column by Mary Anastasia O’Grady:

As recently as 2018, Major League Baseball sought a deal with Raúl under which Havana would send players to the U.S. and baseball would garnish their salaries and send the dollars back to the dictatorship -- as if the players were the regime’s property rather than the teams’ employees.

Major League Baseball said it would be paying the Cuban baseball league, which it absurdly described as independent of the totalitarian regime. At the time, a U.S. baseball official assured me that the league’s “intentions are pure.”

That made me laugh out loud because, as I wrote in a column on Dec. 30, 2018, the deal was purely mercenary: “The league gets cheaper talent in exchange for enforcing regime control of the players.”

The Trump administration shot down the proposal, but it stands as evidence of the league’s ethics.

The Castro regime is hypersensitive about its reputation for repression, and it spends enormous resources on propaganda to combat it. Baseball has often proved useful in that effort.

Yes, let's do the wave with Raul, who does not hold elections, and call Governor Brian Kemp of Georgia a racist.

President Biden's border mess was a totally self-inflicted wound rooted on the aforementioned TDS.  MLB's decision is like facing a young and wild Nolan Ryan without a helmet.

Biden could have reasonably said to the immigration activists:   Sorry but I can't open the border in the middle of a pandemic.  Who could argue with that?

Manfred could have told Stacey Abrams:  Sorry but we don't politics and do you really want all of that money to go to another city?

The two men cracked and now we see the consequences of unnecessary, stupid decisions.