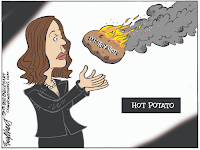 Watching VP Harris avoid the U.S.-Mexico border reminds me of that song by Sandie Shaw from the golden age of Top 40 radio:

"You wanna see her

You wanna see her, oh yeah

So you wait, you wait and wait

Yes, Madam Vice President is everywhere but down here.

Maybe this is one of the reasons why she is not playing well with the American public.  This is from Paul Bedard:

America is not quite there yet on Vice President Kamala Harris, with a sizable number viewing her unfavorably and the nation overall split on her becoming the first female president.

In the latest Rasmussen Reports survey, 50% have an unfavorable view of her. And most, 43% expressed a “very unfavorable” opinion, a sour note to her debut on the world stage as she addresses the United Nations on Monday concerning the global coronavirus crisis.

Rasmussen noted that a majority of likely voters do not believe that she is qualified to take over for President Joe Biden. But the nation is split on the question. Some 50% said that she is not qualified, and 46% did.

To be fair, many Americans did not think that VP Quayle was ready to replace President Bush and VP Gore did not exactly come to town with a lot of foreign affairs experience.

Furthermore, the public may simply be confirming the political divide.  Did anyone hear that we are divided electorate?

VP Harris does have image problems and she showed it during the primaries.  She is not likeable and seems afraid to tackle an issue that is hurting President Biden.  I hope that VP Harris understands that it is a Biden-Harris issue and not one that she can dump on her boss or bureaucrats.

According to the poll, voters are expecting VP Harris to play a major role in the Biden administration.  Unfortunately, she is doing a lot of Zoom calls but has not had one, in person or virtually, with anyone down at the border.