I guess you didn't watch the Oscars either 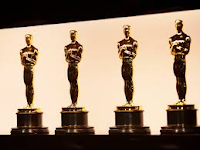 They had a big event on TV last night called the Oscars.  Well, as Bill Clinton would say, it depends what the definition of "big event" is.  Is it really a big event if nobody watched it?

According to the early numbers, no one did.  Yes, that sound you heard last night was Americans flipping channels or turning off their sets.  By the way, I did hear a few neighbors cutting their grass last night.  Maybe they waited until the evening because it's cooler.  Or maybe they were voting with their "lawn movers" and rejecting the Oscars.  I don't know, but it was interesting.

This is from Newsalert:

Last night’s Oscars viewership was down over 50% off last year’s numbers, which were the worst ever.

Okay, I don't follow TV ratings for a living.  Nevertheless, "disaster" may be appropriate.  How many more viewers can you lose before you don't have any?

So what's going on?  A family friend mentioned over lunch yesterday that she had not seen any of the movies under consideration.  Another gentleman said that he just hates Hollywood.  Wonder how many millions he represents?

It's simple Marketing 101 for me.  You can't reach most Americans if you spend the entire show telling viewers how rotten they are or how terrible the country is.  Sooner or later, you will insult the customer and he or she will watch something else.