Atlanta in the World Series plus election in Virginia

Tuesday's video: Is the Trump card getting old? 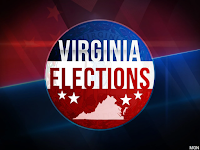 The title of Admiral goes woke 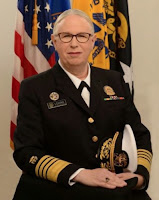 What happens when a boy running as a girl beats a girl in a track and field tournament?  Well, a boy denies a girl a trophy or in some cases a scholarship.  I remember when boys denying girls trophies was called sexism or some other -ism.   Wasn't promoting girls' sports the objective of Title 9?  I guess that no one thought about woke back then.

What happens when a man dressed as a woman is made the first female 4-star admiral?  He denies a real woman the honor.

What happens when the members of the armed forces see this?  They may not see it the same way they do at MSNBC.  After all, an admiral is a title usually reserved for people who've accomplished serious things serving the country.  It's something you earn, not something to pander to the left constantly growing impatient with the Biden administration.  I remember when admirals commanded sailors, submarines, and ships.

This is from John Lucas:

The four-star designation calls to mind such historical and accomplished military men as Admiral William Halsey Jr., who commanded the Pacific Fleet in the fight-to-the-death against Japan (and was promoted to five-star rank only after the end of the war), and such notables as Gen. George Patton, recipient of two distinguished service crosses for heroism in battle and the American commander most feared by the Germans in World War II.

Even Patton was a “mere” three-star general when he commanded the Third Army in its drive through Europe into the heart of Germany, and was only awarded his fourth star less than a month before the war’s end. Thus, while maneuvering his Third Army to relieve Bastogne during the Battle of the Bulge, Patton would have been outranked by now-Admiral Levine.

In short, promotion to the four-star level normally indicates decades of military service, often in dangerous and life-threatening circumstances, and military achievements of the highest order. Levine does not remotely merit any comparison with these or any of the other accomplished four-star officers, whether admirals or generals.

No such service happened here.  This is an appointment based on woke not anything else.  I'm sure that the new Admiral Levine accomplished something in his or her career.  I'm not trying to be a jerk here.  No doubt that his/her appointment is not about military service but rather checking off another box in the identity politics page.

Would a man with a similar background been made a 4-star Admiral?  I don't think so.