Thursday's show: President Trump in Europe and Peter Strock before the House plus more

Thursday's show:
President Trump in Europe and Peter Strock before the House plus more:

Thursday's video: President Trump's style vs what he is actually saying 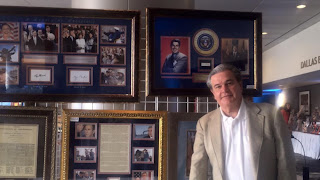 Thursday's video:  President Trump's style vs what he is actually saying......

What change in Cuba?

We were very skeptical a few years ago about President Obama’s opening to Cuba.   It made little sense because we got nothing back.  It was the Cuban version of the Iran nuclear deal without the $ 1 billion in cash flown in at night.
The latest from Cuba is that taxes and controls are going up, as we see in The Miami Herald:

The Cuban government issued new measures on Monday to limit the accumulation of wealth by Cubans who own private businesses on the island.
The provisions stipulate that Cubans may own only one private enterprise, and impose higher taxes and restrictions on a spectrum of self-employment endeavors, including the arts.
The government announced that it will start issuing licenses to open new businesses — frozen since last August — but established greater controls through a package of measures intended to prevent tax evasion, limit wealth and give state institutions direct control over the so-called cuentapropismo or self-employment sector.
The measures will not be immediately implemented.
There is a 150-day waiting period to “effectively implement” the new regulations, the official Granma newspaper reported.
Cubans who run private restaurants known as paladares, for example, will not be able to rent a room in their home to tourists since no citizen can have more than one license for self-employment.

My Chilean friend who just visited Cuba explained what he saw.    He said that Cubans have caught the “self employment” fever and want more of it.   As a result, some Cubans are getting rich.   The Cuban Communist Party does not like that and sees “entrepreneurial” Cubans as a threat to the revolution, as they like to say.

Of course, what else do you expect from a communist regime accustomed to controlling every corner in the island?

Or as my late father used to say whenever he heard about reforms in Cuba.   He would caution me:  “Son comunistas” translated to they are communists!

A thought about Trump's statement in Europe.

My guess is that the second audience is a lot bigger.