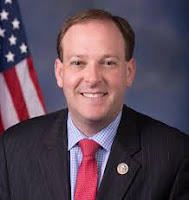 For us Republicans, 2022 did not see the big wave forecast, but did bring us a small House majority and a 50-50 Senate is still possible.  So cheer up and get ready for the next one.   The Democrats won't have abortion the next time around and my guess is that even brain dead college students have figured out that they were used on the issue of cancelling college loans.

My choice to lead the party is Lee Zeldin, the other big star of the 2022 elections.  He should replace Republican National Committee chairwoman Ronna McDaniel who doesn't excite anyone.   She's a nice lady, but we need a fighter like Zeldin.

The magic of Zeldin keeps on growing according to Craig Angioletti, the author of the Substack The Legislative Route:

Despite the loss, momentum for Zeldin never died out. Despite a close race in a Democratic state, there have been calls for Zeldin to replace McDaniel for the national chair. While he may be exploring the option to run for the position, there is a good case as to why he should pursue it.

Republicans have recently been dissatisfied with the midterm election in their party's ability to take heavy majorities of both chambers of Congress and kept wondering how to move forward. A key to Zeldin's relative success was that he went hard to show up in Democratic areas, where, frankly, it’s a strategy many Republicans seem to not want to commit to.

In a recent tweet , he said, "Show up in EVERY COMMUNITY, speak directly with people of EVERY BACKGROUND, and passionately promote safety, freedom, education, and economic opportunity for EVERY AMERICAN."

Running such issues not only helped Zeldin gain appreciation from registered Democrats themselves, but nearly pulled off the coattails to win three NYC city council districts and flipped five Democratic U.S. House seats into red territory.

Sometimes you have to change the guy, or gal, running things.  It's not that he or she failed, but we need to win in 2024.

Zeldin can bring some fire as he travels around the country.  His focus on crime in New York could inspire other GOP candidates to pick up that theme in blue cites.

So let Lee head the party.   If not the party, then make him Speaker Zeldin!  I'll be happy either way.