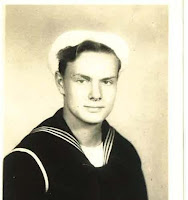 Mr. Jagers was quite a celebrity in our area, a member of our parish and wonderful storyteller.  For years, he visited the local schools and you could hear a pin drop when he spoke to youngsters learning about D-Day in their history classes.  The kids loved him and called him back over and over.

To say the least, Mr. Jagers had quite a story to tell, from war stories to hitting a Bob Feller pitch during a baseball game in the Pacific theater.  He saw Lou Gehrig, Joe DiMaggio, and Hank Greenberg play.  How cool is that?

In October 1968, Bob was working for a U.S. auto manufacturer in Argentina.  He ate lunch and tuned in U.S. Armed Forces Radio to hear Mickey Lolich and his favorite Detroit Tigers beat Bob Gibson’s Cardinals in game seven of the World Series.  He once detailed Jim Nortrup’s triple over Curt Flood’s head, a key play in that game.

A few years ago, Bob published his story in a book called Whales of World War II:

I was born in 1922 in Chicago, Illinois, and later moved to Grand Rapids, Michigan.

I graduated high school in Grand Rapids.  I went to two years of Aquinas College in Grand Rapids before entering the war.  I enlisted in the Navy in April of 1942.  But they permitted me to finish my term.

In June of 1942 I was sent to Great Lakes naval training center, for my boot camp.  After boot camp, I went to quatermaster signaling school .

Upon completion, we were asked what kind of ship we wanted to be on, and I said I wanted to be on a submarine.  They interviewed me and gave me some exhaustive tests for submarine duty, and they said I was number 21.  The next complement of sub sailors needed was of 20.  If any of the previous 20 were rejected, or refused to go for some reason, then I would be selected.

Looking back 50 years, I was quite fortunate in that all 20 of them were selected.  The next thing I knew I was on a train for amphibious training at Solomons Maryland.

An LST is the slowest ship in the convoy.  It travels maybe four or five knots,  about six miles an hour.  Not only do you travel from Bermuda to North Africa, but you have to zig zag.  So I’m sure that the destroyers and destroyer escorts that were accompanying us really didn’t like to see the LST’s come along because the convoy moved very slowly.

We went to the straits of Gibraltar, landed at the naval base of Oran.

On page 109 of Whales of WWII, Robert recalls D-Day and his participation.  He remembers the heroic work of U.S., U.K., and Canadian young men landing on the French coastline.  It must have been an awesome day for a 22-year-old sailor.

In 2014, Bob spent the 70th anniversary in France with some of the men he spent D-Day 1944 with.  We did a show about it, and it was a treat to listen to him.
Rest in peace Mr. Jagers.  We will miss you a lot.
P.S.  You can listen to my show.  If you like our posts, please look for ”Donate” on the right column of the blog page.

Monday’s video: What was the Commissioner of baseball thinking?

Monday’s video:
What was the Commissioner of baseball thinking?
Click to watch:
Posted by Silvio Canto, Jr. Post Link ---> 9:00 AM