Thursday’s video: Why all the talk about the Georgia legislation?

Thursday’s video:
Why all the talk about the Georgia legislation?
Click to watch:
Posted by Silvio Canto, Jr. Post Link ---> 9:30 AM

Will Joe Biden be playing Pinocchio in the remake? 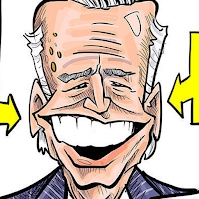 It's been a tough couple of weeks for the man who pledged to unite us.  It looks from here that he is getting a lot of "Pinocchio" awards for his public statements, from the Georgia law to his jobs claims.

This is from Glenn Kessler, the "Pinocchio" man:

This is an example of the White House wanting to have its cake and eat it too.

Note how Biden carefully does not say the infrastructure plan would create 19 million jobs; instead, he says the economy would create that many jobs if the plan was passed.

Biden’s language is just on the edge of being technically correct, but even experienced communicators such as Deese and Buttigieg messed it up during interviews. That’s because -- as Brennan’s question demonstrated -- the impression left by the White House’s finely tuned language is that the infrastructure bill would create 19 million jobs all by itself.

In fact, the bill is estimated to create about 2.7 million additional jobs over 10 years. That’s a huge gap between the two numbers -- six times smaller. While Biden at times used somewhat similar framing regarding the earlier Moody’s report on the American Rescue Plan, the gap in that case was not nearly as large.

We appreciate that the White House has corrected the record when officials have strayed from the talking point. But the president would be better off following the example set by Bernstein, clearly delineating that this figure reflects three components -- natural growth, the American Rescue Plan and the infrastructure proposal.Even better, he could state simply what Buttigieg eventually did: that Moody’s estimates that nearly 2.7 million jobs would be created by the infrastructure plan.

That's two Pinocchio this spring.   Writing executive orders challenged by states and getting Pinocchio awards are the early legacy of the Biden presidency.

Biden and job predictions does sound like a song we've heard before.  Remember the jobs stimulus of the summer of 2009-10?   I don't remember if those predictions got "Pinocchios” but he certainly came up with a lot of whoppers back then.

Memo to Hollywood:   Want someone to play Pinocchio?  Your man is Joe Biden.  Of course, I shouldn't say “your man" because the "wokes" may object to that.