Thursday’s video: Congratulations to the Washington Nationals, the new champions of basdball

I hope that more priests call out Democrats on abortion

For years, I’ve heard priests talk about life and how we must protect the unborn.  More than that, many Catholic groups, such as The Knights of Columbus, march in front of abortion clinics.  Also, many priests accompany parishioners to the annual parade on the anniversary of Roe v Wade.
Then we read this:

Former Vice President Joe Biden, a candidate for the Democratic nomination in the 2020 presidential race, was denied Holy Communion on Sunday morning at a Florence church.
Father Robert E. Morey of Saint Anthony Catholic Church confirmed Monday afternoon that he had denied the presidential candidate Holy Communion because of his stance on abortion. Biden, a lifelong Catholic, had attended the church’s 9 a.m. Mass.

Why is anyone surprised?  The church goes out of its way to prevent abortions by counseling mothers to have their babies and consider adoption.
I hope that priests in are listening.   We need more pro-abortion politicians called out on their support of abortion even if they publicly say that they don’t believe in it
Last, but not least, it’s time to ask these candidates about late term abortion.
PS: You can listen to my show (Canto Talk) and follow me on Twitter.
Posted by Silvio Canto, Jr. Post Link ---> 7:11 AM

2016: What radio show would Orson Wells do about this election?

(My new American Thinker post)
On October 30, 1938, millions of Americans had their dinner and sat down to listen to the radio. It turned out to be a rather unusual Halloween night:

Sunday evening in 1938 was prime-time in the golden age of radio, and millions of Americans had their radios turned on. But most of these Americans were listening to ventriloquist Edgar Bergen and his dummy “Charlie McCarthy” on NBC and only turned to CBS at 8:12 p.m. after the comedy sketch ended and a little-known singer went on. By then, the story of the Martian invasion was well underway.
Welles introduced his radio play with a spoken introduction, followed by an announcer reading a weather report. Then, seemingly abandoning the storyline, the announcer took listeners to “the Meridian Room in the Hotel Park Plaza in downtown New York, where you will be entertained by the music of Ramon Raquello and his orchestra.” …  An announcer broke in to report that “Professor Farrell of the Mount Jenning Observatory” had detected explosions on the planet Mars. Then the dance music came back on, followed by another interruption in which listeners were informed that a large meteor had crashed into a farmer’s field in Grovers Mills, New Jersey.
Soon, an announcer was at the crash site describing a Martian emerging from a large metallic cylinder. “Good heavens,” he declared, “something’s wriggling out of the shadow like a gray snake. Now here’s another and another one and another one. They look like tentacles to me … I can see the thing’s body now. It’s large, large as a bear. It glistens like wet leather.” But that face, it… it … ladies and gentlemen, it’s indescribable…”
The Martians mounted walking war machines and fired “heat-ray” weapons at the puny humans gathered around the crash site. They annihilated a force of 7,000 National Guardsman, and after being attacked by artillery and bombers the Martians released a poisonous gas into the air. Soon “Martian cylinders” landed in Chicago and St. Louis. The radio play was extremely realistic, with Welles employing sophisticated sound effects and his actors doing an excellent job portraying terrified announcers and other characters.

They say that a million people fell for it.
Maybe a 2016 version of Orson Welles could do a radio show about a presidential candidate who used a private server as Secretary of State.
Then he can tell us about the lady’s assistant who is married to a rather bizarre fellow addicted to sending strange texts to young women.
And the climax of the story is when the FBI discovers that the bizarre fellow had classified information in his laptop.
Wonder if any radio producer would buy that story? My guess is that that they would reject it on the grounds that they don’t think any candidate for president would be that stupid.
Orson, where are you when we need you?
P.S. You can listen to my show (Canto Talk) and follow me on Twitter.

Still the best Halloween song after all these years!

My sons don't "trick or treat" anymore but it's still great to see the next generation with their costumes knocking on your door.

To say the least, Halloween is a great excuse for us adults to eat those chocolate treats.    I've had my share of "treats" over the years.

Over time, we've seen movies, TV specials and have heard songs about Halloween.   I guess that The Charlie Brown special is my favorite.  The Disney stuff is usually good.  I don't care much for the "Friday 13th" movies.  They're a bit too scary for me!

Halloween song?  My favorite, and # 1 after all of these years, is Bobby Pickett's "Monster Mash".   It gets a lot of airplay every year: 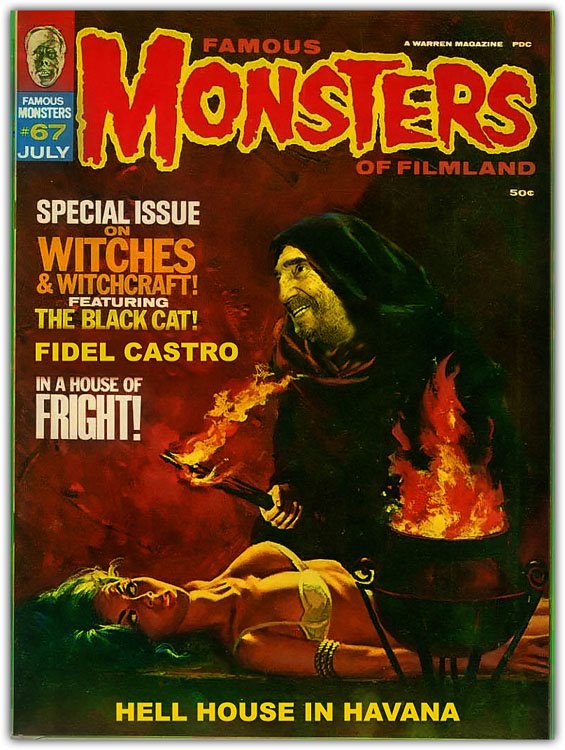 Fidel Castro died in 2016.   So we remember him this Halloween.

This is the story of a Cuban Halloween!

President Obama is finally under 40%, or 37% in the latest AP poll:

"Most Americans disapprove of the way Obama is handling his job, the poll suggests, with 53 percent unhappy with his performance and 37 percent approving of it. Congress is scraping rock bottom, with a ghastly approval rating of 5 percent."

To be fair, the GOP House is taking a hit too.   My point is that President Obama, and everybody else in Washington, is hurt by this crisis.