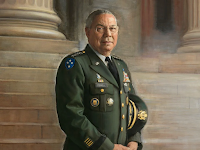 We live in interesting times.

Enter our Secretary of Transportation.  He's been missing in action during the supply chain crisis on the grounds that he is on paternity leave.  Two months on paternity leave when ships are lining up at the ports because they can't unload?   Where we can find work like that?

Where is the outrage?   I guess that there is some finally brewing, as we see in this Politico report:

One of the White House’s go-to communicators didn’t appear on TV. He was absent on Capitol Hill during the negotiations over the bill he had been previously helping sell to different members of Congress. Conservative critics tried (unsuccessfully) to get #WheresPete to trend and Fox News ran a story on October 4 with the headline: “Buttigieg quiet on growing port congestion as shipping concerns build ahead of holidays.”

They didn’t previously announce it, but Buttigieg’s office told West Wing Playbook that the secretary has actually been on paid leave since mid-August to spend time with his husband, Chasten, and their two newborn babies.

Sorry, but it's time to go back to work.  Kiss your husband and babies "good day" and get back to work.  Tell Chasten and babies that Daddy has work to do.  Do warn Chasten that you may be traveling a lot and please keep the meatloaf warm when daddy gets home late.

What amazes me about this whole episode is that no one took note that the Secretary of Transportation was absent during this crisis.  To my knowledge, no one in the media was looking for the Secretary.  Isn't he responsible for this department?

We hear that Secretary Buttigieg wants to be our first gay president.  Well, I hope that Chasten is ready to take care of the babies if the red phone rings at 3 am, or that dreaded 3 am call that wakes up presidents.

Why isn't someone asking President Biden about this?   Oops, I forgot.  He does not take questions!